……aka EllieMae Clampett goes to the Big City 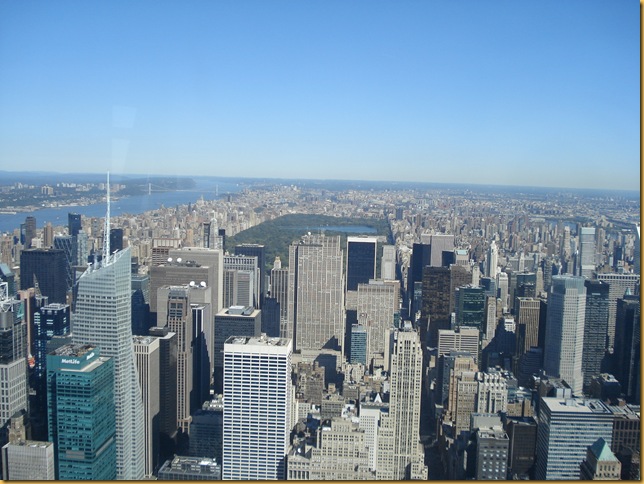 from the 102nd floor of the Empire State Building

I received a call from my boss last month while out of town to provide moral support for Daddy while he had knee surgery.  She asked if I would like to tag along on her trip to New York City.  She was going for a conference but my coworker and I would have 3 1/2 days to play in the city.  Ummmm, let me think a minute………not just YES but Heck YES!
Radio City Music Hall 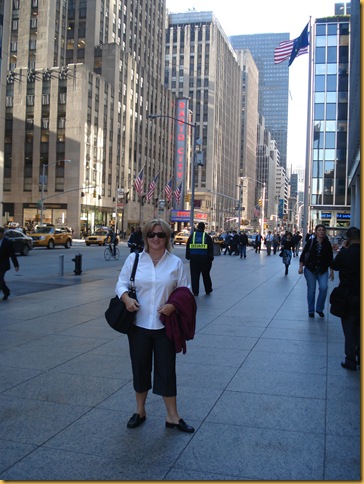 This was my second trip to NYC and even though I haven’t spent a lot of time there, it is my most favorite city.  If someone ever offers to take you on an all expenses paid trip to New York City, pack your bags and get yourself to the airport, PRONTO!  Better yet, just say, “No, take SMB instead.”

My travel companions were both native New Yorkers so I was treated to do whatever I wanted to do as they had both seen it all before.  What I know about New York, I learned from the movies.  For instance, Jack (Nicholas Cage) in The Family Man taught me that there is nothing like a warm bialy and a cup of coffee from Dean and Deluca.  Unfortunately, I will never know as they were fresh out of bagels and bialies when I was there.  I was told that has never happened before.  No worries.  They still had coffee and muffins.


I really wanted to have the frozen hot chocolate at Serendipity (and hopefully run into John Cusack) but by the time Saturday evening rolled around, that little treat got bumped off the agenda in favor of lounging in our hotel room and watching FSU football and the Yankees baseball game.  Yeah, we’re quite the party animals. 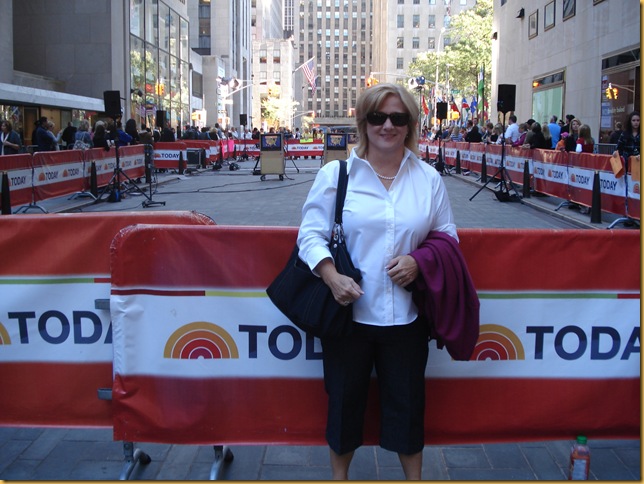 I had big plans to win the Ambush Makeover but apparently you have to get there long before 9am.  Who knew?  The Today Show waits for no one!  Not even SMB.
Pseudo of Winds of Change sent me a message while I was there.  She asked her readers to make recommendations and give travel tips to me.  I was able to read her blog on my phone so I received tips on the go.  Pseudo suggested that I try the Stage Deli.  I had no idea where the restaurant was but Friday afternoon found me wandering the streets of New York by myself as my coworker was a bit “fluish”.   After my solo adventure, I planned to stop by a pizza place near the hotel and grab a slice and take it back to the room to check on my sick friend.  Lo and behold, right across the street from the pizza place (and indirectly  across from our hotel) was the Stage Deli!  I couldn’t resist.  I sat at the bar by myself (like a big girl) and enjoyed a Kevin Bacon, Lettuce and Tomato sandwich with a Brooklyn Lager and it only set me back $22.  Did I mention that everything is more expensive in New York?  No one cares……….BECAUSE IT’S MANHATTAN, BABY! 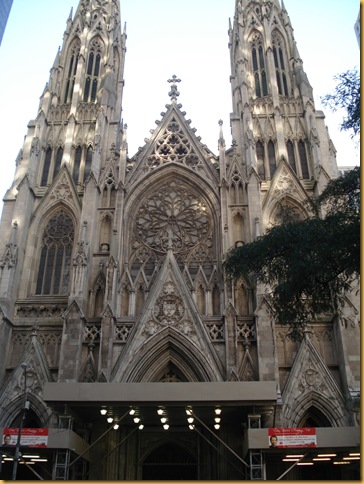 My photograph of St. Patrick’s Cathedral doesn’t even come close to doing it justice.  To say it was beautiful is such an understatement.  There are no words.  And yet…..I go on.

My boss knew that St. Patrick’s was on my to-do list and as we walked past it on our way from getting breakfast Sunday morning, she asked if I had seen it yet.  I said that I had.  I told her that I had taken some pictures.  She asked if we had gone inside.  When I told her that we had not, she said, “Come on, let’s go.”  I began to follow her all the while protesting.  “It’s Sunday!  They’re having mass.  We can’t just walk in there now.”

She rolled her eyes at me and said, “It’s a church.  You’re always welcome there.”  And in we went.  (with our coffee and bagels)  She was right, of course.  It wasn’t to be missed.  It was truly magnificent!  The fact that mass was being held only added to its beauty.  I wish I had a picture.  You just have to go.  That’s all there is to it.  I had to thank her afterward for forcing me to go inside.  I’m so glad I didn’t miss it.  And isn’t it just a little bit funny that it took a Jew to remind me, a Christian, that you’re always welcome at church?

……….and from church, we’ll jump to that Times Square icon:  The Naked Cowboy! 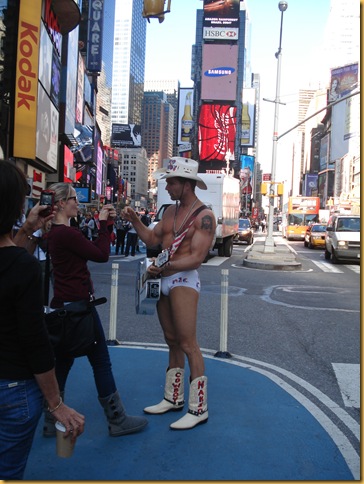 If I lived in Manhattan, I would be even more broke than I am now.  I would spend all my money on theatre tickets…….and coffee….and wine.  After all, woman can not live on entertainment alone.  I LOVE live theatre.  Any live performance really.  I love anything from a high school production to a Broadway play.  And no trip to New York is complete without theatre tickets!  This trip was no exception and tickets were purchased for: 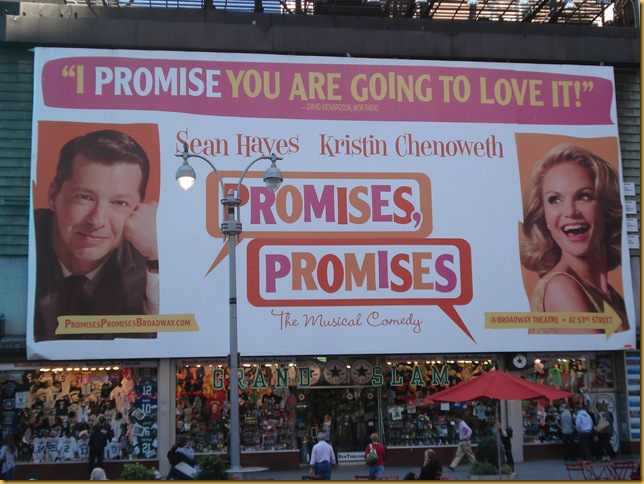 We had a lovely pre-show dinner at Carmine’s (another don’t miss it or you’ll be sorry) followed by what’s this? 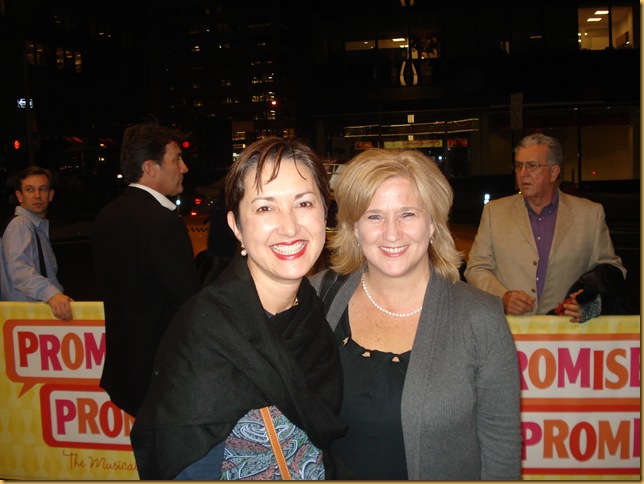 A Tweet-up with AuntChrisBronx!
I met Chris on Twitter, if you can believe that.  It never ceases to amaze me how such wonderful friendships are formed in the interwebs.We’ve been friends for almost two years now.  I only got to see her for  few minutes before we had to go into the theatre but I’m so glad we got to meet and hug.  And isn’t she BEAUTIFUL!
Promises, Promises is fabulous!  We all LOVED IT!  You couldn’t wipe the smile from our faces for at least 24 hours after seeing this amazing display of talent!  I got a great tip from some friends who had been to the play earlier this year.  They told us just where to wait to get photos and autographs after the show.  And that’s just what we did. 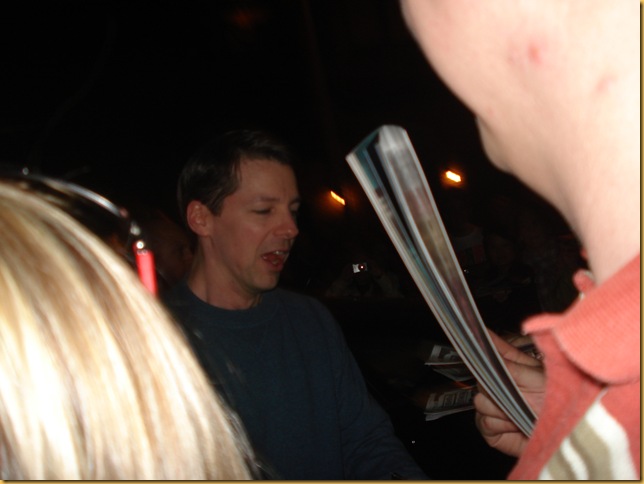 Sean Hayes of Wil and Grace fame.  He was GREAT! 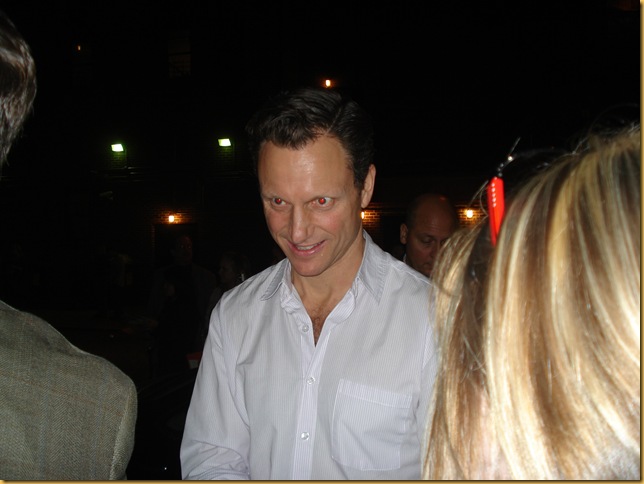 Tony Goldwyn from Ghost and Kiss the Girls.  In Promises, Promises, he plays the guy you love to hate too. And Kristin Chenoweth!  She is no bigger than a minute but that voice is HUGE!        LOVE her! 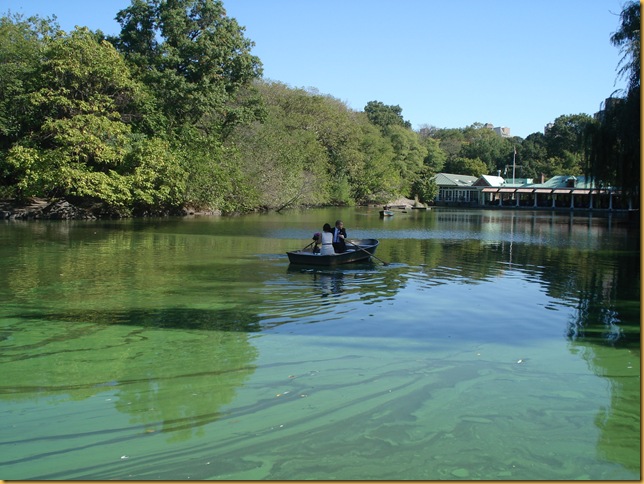 I’m pretty sure there’s a marriage proposal in the works here.  (If not, I’ll always think there should have been.) 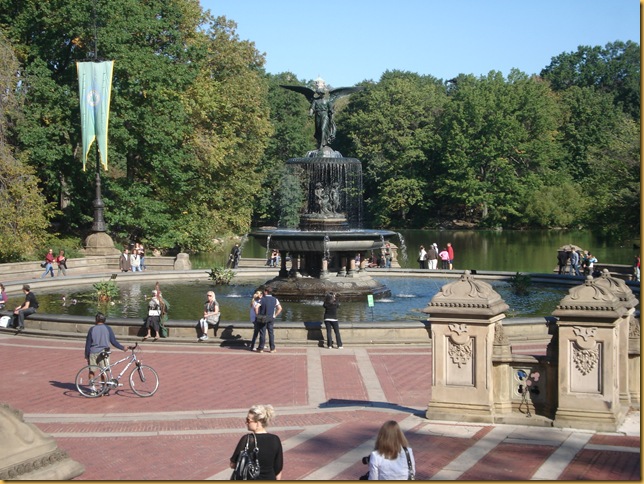 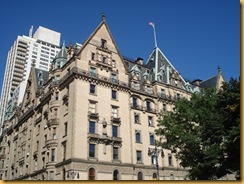 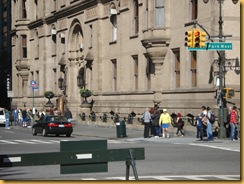 We were in NY for John Lennon’s  70th birthday.  There were crowds of people singing Imagine in the Park at his memorial.  The above photos are of his apartment building where Yoko Ono still lives.  She has three apartments up there when the balcony is.  (or so we were told by our bicycle cabbie, Ozzy)  He was shot in front of the building between the two planters. 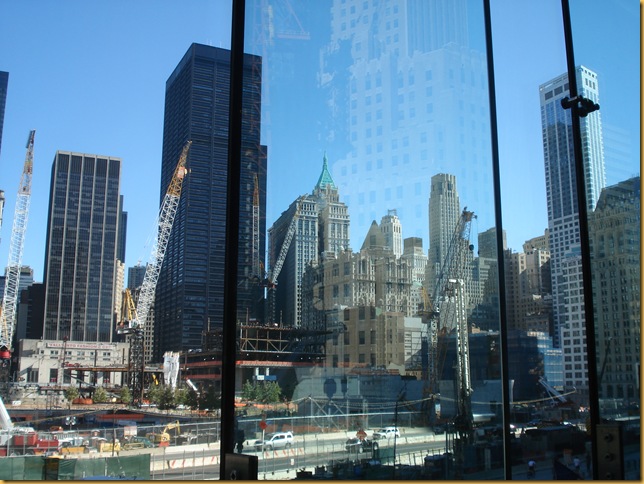 It was encouraging to see the progress at Ground Zero. 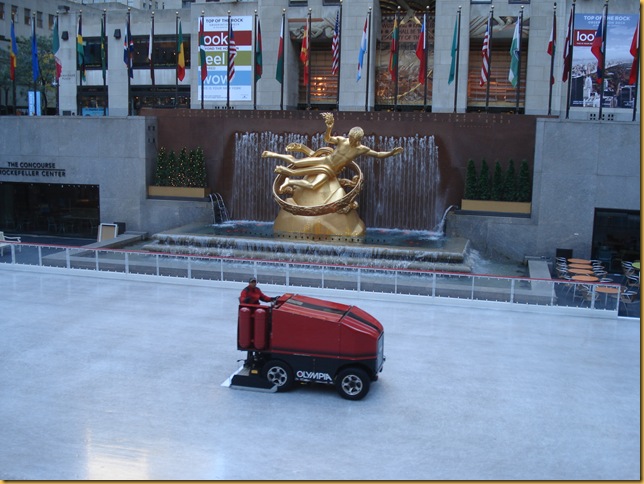 They’re ice skating in Rockefeller Center already.  It’s against security rules to take pictures of the Zamboni guy.  ……like that’s going to stop me. 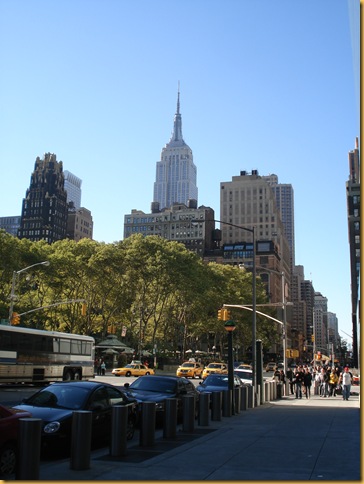 We walked quite a long way to get to the Empire State Building from our hotel but it was worth it! 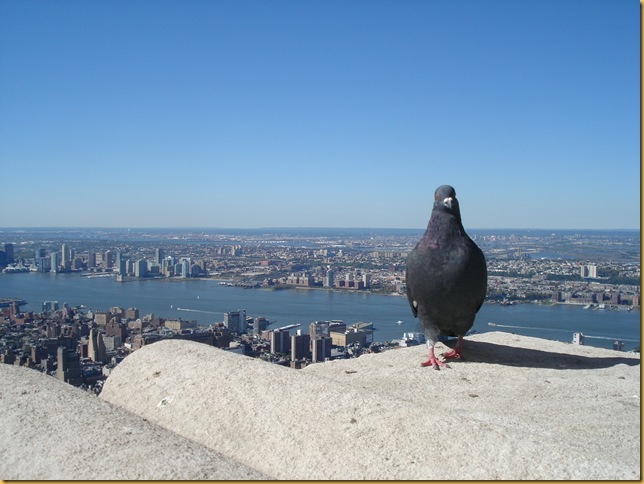 I’m still not sure what my plans are where this blog is concerned but there are tiny wheels spinning in my tiny brain.  A small seed was planted.  We’ll see if it grows.  And that’s all I’m going to say about that.

So what does all this have to do with Mr. Take Me, I’m Yours over there in the photo?  I thought I would just dip my toes into the blogging waters and see how it feels getting them wet again.  And so I give you, Exhibit A:

My Harley Stud and I record a lot of programs on our dvr.  More than any two people with full time jobs, a business to run, a yard to mow, a house to keep and a kitchen to remodel (Don’t get me started) could possibly watch.  Even so, we continue to record and occasionally even sit down to watch some of these programs.  Case in point: NCIS, Los Angeles.

MHS knows this is a favorite of mine.  While he is a bigger fan of the original NCIS, the Los Angeles version is recorded for me.  Today while watching said program, MHS inquired how I’m able to work on the computer and keep up with all the adventure and mayhem showing on the screen.  I looked at him with my best, “Silly man, don’t question my SUPERPOWERS look” and replied that I am a master at multi-tasking.  He just shook his head in confusion.


TRUE CONFESSION:  I have no idea what is going on with that program.  Are these people in the military?  Are they civilians?  What purpose do they really serve?  The truth is:  I just like to look at that adorable Chris ODonnell and watch his lips move.

Let’s just keep this between us, OK?
Posted by Smart Mouth Broad at 4:54 AM 18 comments:

TO BLOG OR NOT TO BLOG 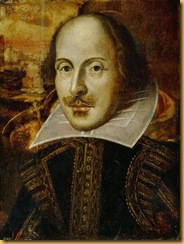 That is the question.

What there is no question about is that I have been neglecting you.  I haven’t    been writing.  I haven’t been reading.  You may not miss me or even realize that I’ve been gone.  And some may even be relieved to see one less item in their reader’s to-do list.  Nevertheless, I’m experiencing that twinge of guilt you have when you realize that you haven’t spoken to an old friend for too long.  Do you break the awkward silence or just put it off for another day until it seems almost impossible to reconnect?

I am a really bad friend.  I’m loyal to a fault.  You lie?  I’ll swear by it.  Land your butt in jail?  I’ll bail you out.  Have schmutz on your face?  I’ll let you know right after I take a picture and post it on facebook.  But should you be even the slightest bit needy, you probably want to keep looking before befriending this slacker.  My only lasting relationships thrive on neglect.


That being said, I’ve been floundering.  I’ve been avoiding this place because I am stressed out, lazy, very busy sticking my head in the sand  lack direction.  I’m not really sure exactly what I was thinking when I created this blog other than I found myself with spare time and a desire to write.  I had no idea that I would find friendship in this interwebby world.  But it was friendship I found.  And I cherish those relationships.   I miss having the time to get around and read all the fabulous blogs that I love, not to mention catch up on what my friends are doing.

So this is me …… telling you ……. I’m sorry for neglecting you.  I miss you.  I love you.  I’ve sort of fallen and can’t get up.  I’m not sure what’s going to happen in these pages.  They may be abandoned for a long time or forever.  Or who knows, I may be inspired tomorrow and bounce right back.

No matter what, know for sure that I think of you often.