LIVE TO RIDE AND RIDE TO EAT

When the Biker Nazi is in town, there is no question about what we’ll be doing. Ride, ride, ride. We spent all day Saturday on the bikes and covered a good many miles and explored city and country near our home. We started the day with a ride out to Indiantown and enjoyed brunch at the Seminole Inn. The inn opened in 1926. Entering the inn gives you the feeling that you are stepping into a gentler time in history. I would have loved to have spent more time snooping around with my camera but we were just there to eat and run. One day I’ll insist on going back. That shouldn’t be too difficult as it is not far from our home and My Harley Stud enjoyed it too.

The Biker Nazi never met a stranger and managed to make new friends who can take him hunting on his next visit to sunny Florida. 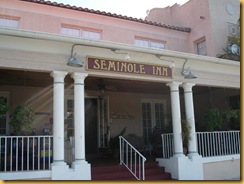 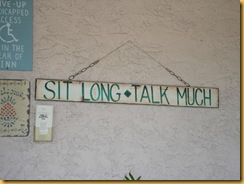 I like this idea: Sit long, talk much. Right up my ally. 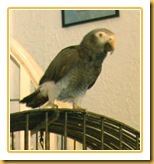 Cracker, the parrot, welcomes you as soon as you step over the threshold. 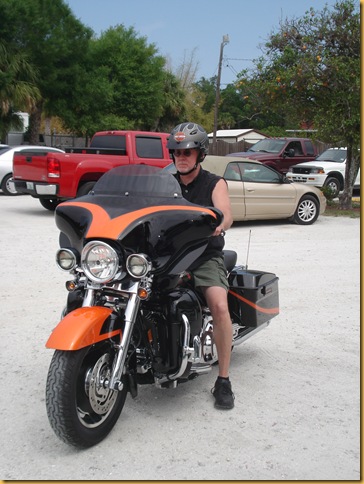 The Biker Nazi loved the new paint job on his bike. 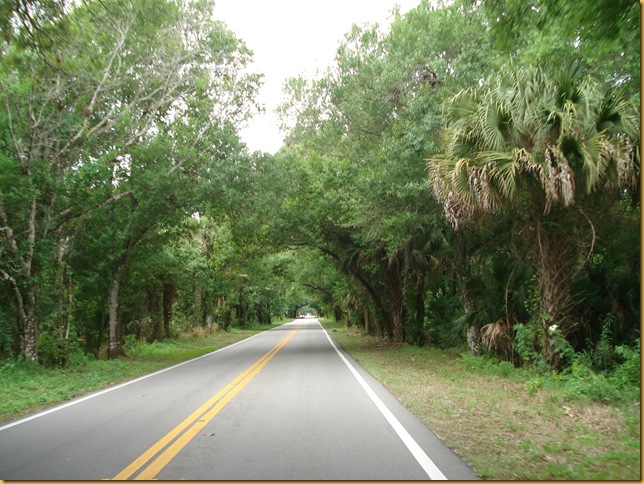 I just love it when the trees form a canopy under which for us to pass. 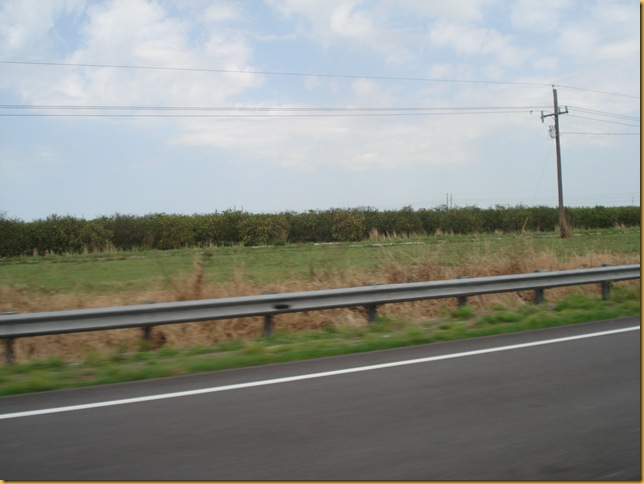 You don’t have to drive too far out of town to see orange groves. I’m not sure why these haven’t been picked yet. It’s kind of late in the season, I think. 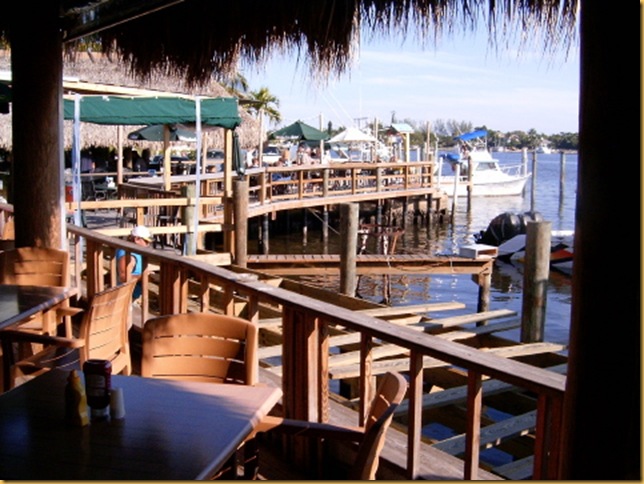 By the time we made it to the Keylime Grill, our bellies were grumbling for more than beer. My diet was blown out of the water with Pub style fish and chips. Yum to malt vinegar. Did someone take my willpower? How am I going to make my goal with temptations like this?

The yum factor was short-lived though. I haven’t eaten fried food like that in a long time and my tummy rebelled. Tums were my dessert of choice last night. Grrrr. I should have had a salad.

There was a young man playing to the crowd and he was really good. I asked if he had a CD but alas, he has none. He did give me his website info and you can listen to him here. :) He covered many of my favorites and played some of his original work too. He is quite an accomplished musician, in my humble opinion, of course. 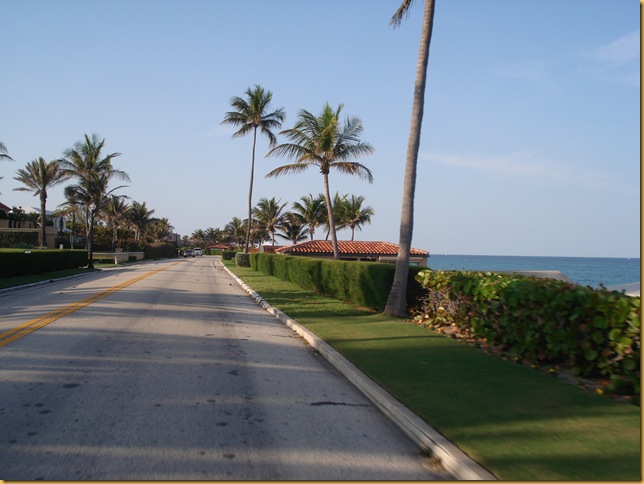 From the Keylime Grill, we headed back North along the beach. We drove along Palm Beach and rubbed elbows with the rich and famous. There were no celebrity sightings but I’m really bad about that anyway. One could be standing right next to me and I wouldn’t notice.

The above photo was taken driving along Ocean Blvd. You can see the Atlantic on the right and the homes of Donald Trump, Rod Stewart, the old Kennedy compound are all on the left. MHS wasn’t driving slowly enough to get any pictures of the homes without blurring. Another time, maybe. He’s a great tour guide and knows who lives where because of his business contacts. The roofs to the right along the beach are the beach houses of the residents across the street. Most have tunnels that go underneath the road to get to the beach. 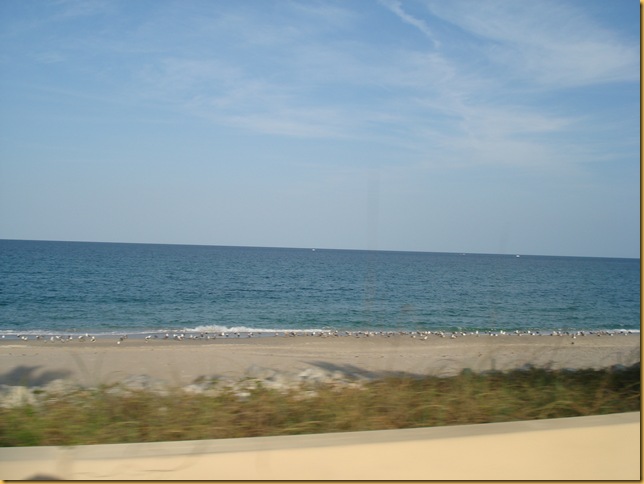 These are the snooty sea-gulls. These snobs probably don’t fly past the edge of the island. Palm Beachers like to stick to themselves. 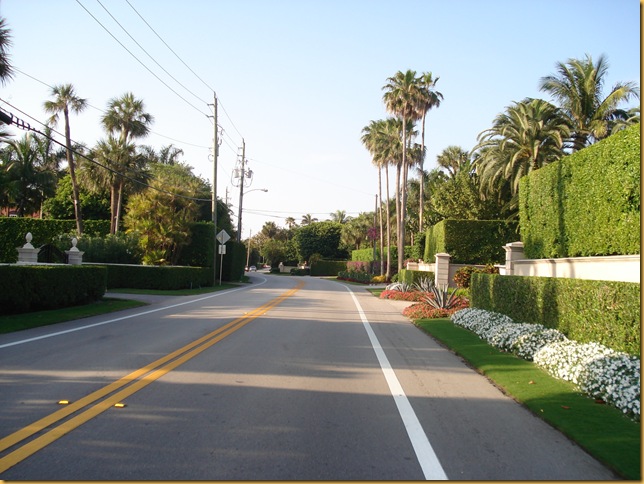 As you drive along Ocean Blvd, you will see main entrances and service entrances. Funny, it’s all the same at my house. 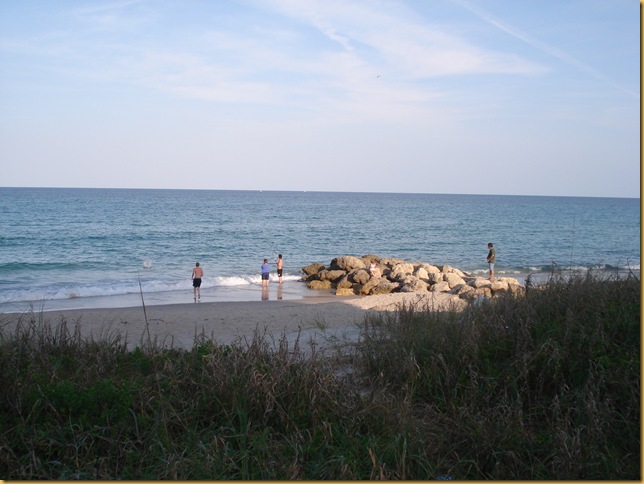 This was taken during a butt break. This particular section of the beach is where Worth Avenue intersects with Ocean Blvd. Worth Avenue is Palm Beach’s equivalent of Rodeo Drive. (The best place for celeb sightings-but be careful. The PB cops have no problem throwing anyone who doesn’t “belong” off the island.) 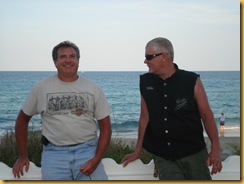 Who is this riff-raff? Palm Beach bikers, of course. 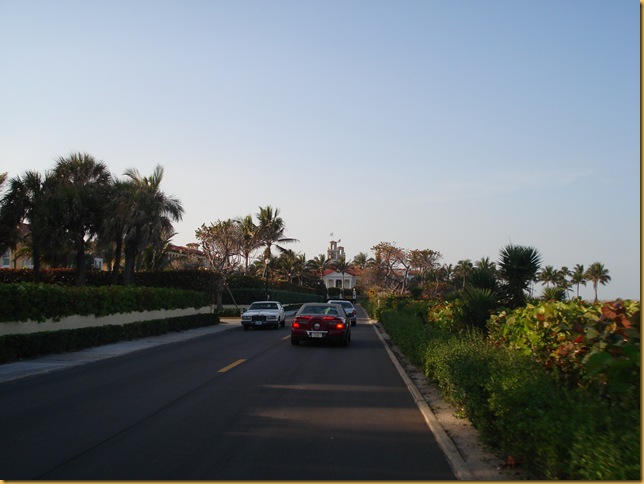 You can see the tower to the famous Breakers hotel looming over the home at the end of the street. I wanted to get a picture of the long, beautiful entrance to the Breakers but new renovations include a guardhouse that obstructs the view. Apparently there were too many smart mouth broads snooping around with their cameras and someone complained. 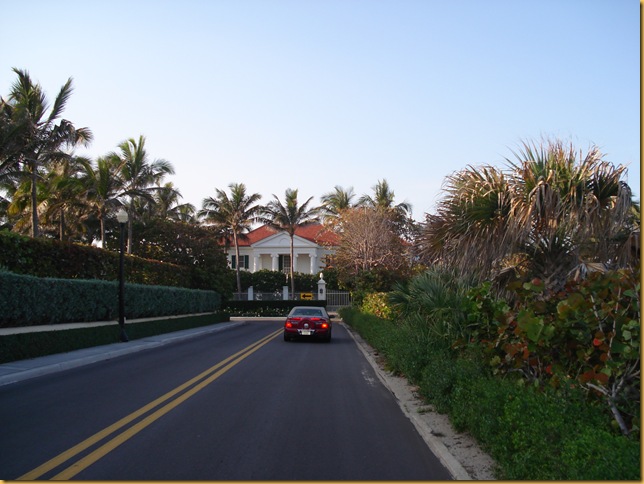 The home at the end of the street once belonged to Clark Gable. I believe it is owned by the heir to the Estee Lauder fortune now. 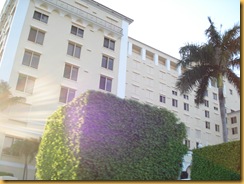 This is a moving picture of the Biltmore hotel on Palm Beach. 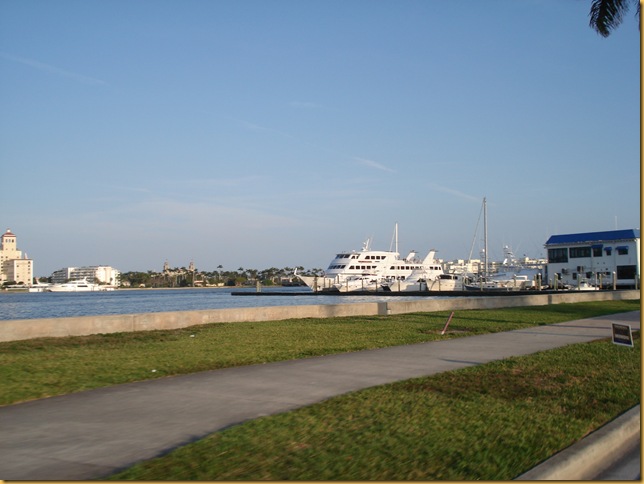 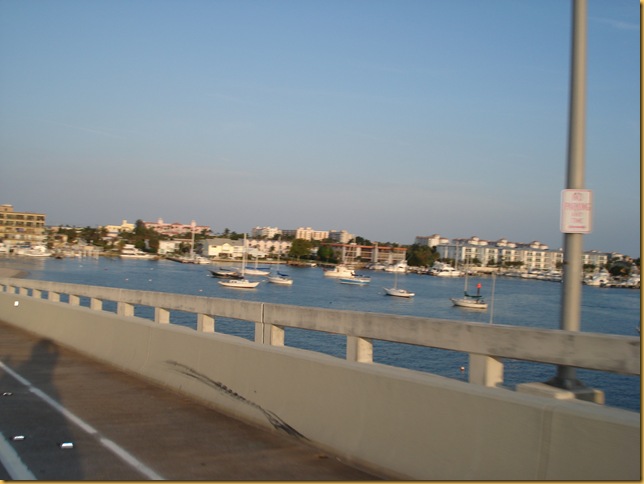 Not a great photograph, but I kept the best of the blurry ones I captured. I learned to scuba dive under this very bridge. Exciting, huh? 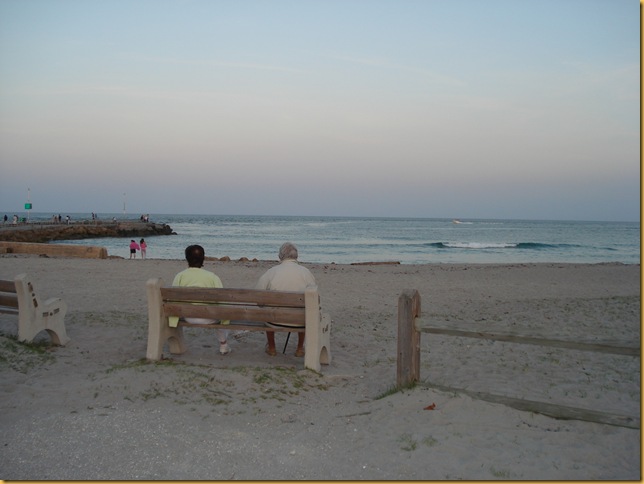 Last but not least: My Harley Stud knows how much I love the inlet. Our ride concluded here. (Well actually, we still had to drive home)

Jupiter Inlet is my favorite place in the world. It soothes my weary soul. 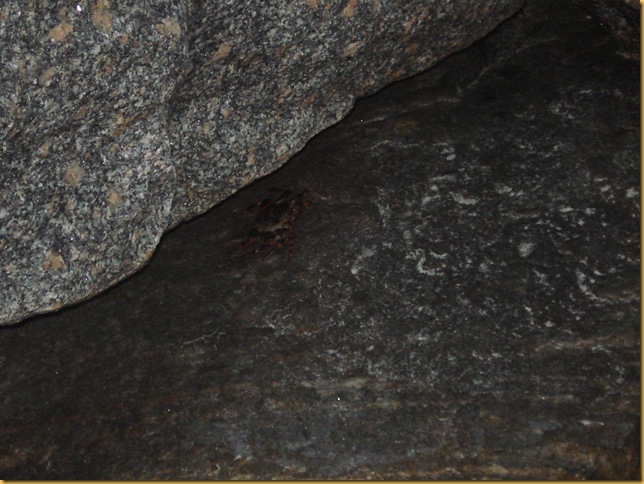 Here you will see my reward for the hunt. I love to walk along the jetty to look for crabs on the rocks. Found one. He was shy and wouldn’t smile for the camera though. 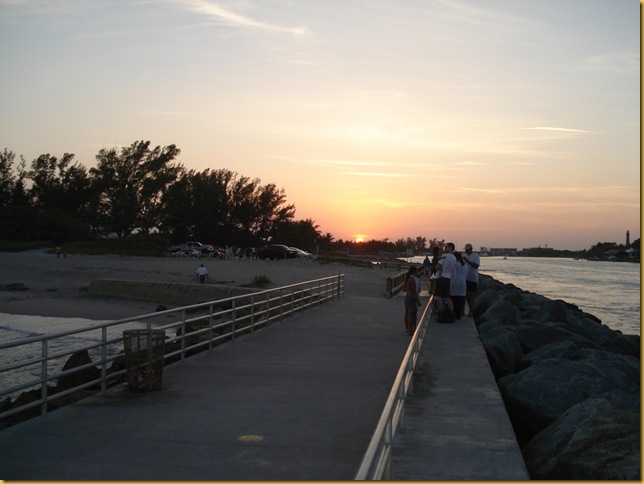 The sun was setting and we had to skidaddle. The park closes at sunset. You can see the lighthouse on the right. I love it here. *sigh*

You're making me green with envy, SMB! Looks just about perfect.

I cleaned house yesterday and baked a sponge cake today.

More excitement than I can take...

(I wanna be in Florida *whine*)

Reading that was like one of the best daydreams I've ever had. I really wish I could come and see everything. I loved every picture and the whole day sounds amazing. You're so lucky.

Those are great pics!! That day sounds fab!!!

tut-tut - Would it make you feel better if I said my butt was really sore?

Jan-That's what I should have been doing but hey, you only live once, right? Come on down. The BN will scoot over.

BV-You've really got to make a plan to visit Florida soon.

Michel-Thanks. I love reading about your life. Very exciting.

SMB - What a beautiful ride and an excellent job documenting it. Good friends, good food, life is good!!!!

Thanks for the Sunday drive. Enjoyed it. Looks like a beautiful day. The crab picture was my favorite. I so love the beach.

Thanks for the Sunday ride. As usual, I'm jealous, of the bikes and beautiful scenery.

Thanks for the tour, SMB! I've been to some of those places! My grandmother used to have a place in Boynton Beach.

It was 60 here today.
Looks warmer there.
I would definitely like to be there in January.

Looks like afabulous day all round! I could have used a motorcycle this weekend traveling home from TN. Would have made getting off the road to take pics much easier:)

You are so lucky to live and ride in paradise! Yes, I am sooooooo jealous! When I was a kid, my family vacationed in Florida every year! Us kids never wanted to go any other place!

Cokeman-Thanks. All good stuff. Well except for the sore butt part.

MLJH-I love the beach but my favorite beach is at the inlet. Where the crabs are. :-)

Lisa-Does it help to know that I couldn't walk when I woke up this morning? I did something to my back and I'm blaming the bike. I gotta blame something, right?

Di-It was a great day.

Movie-The Keylime Grill is in Lantana which is very close to Boynton.

Linda-I'll have to come check out your pics. Posted?

Debra-We are very fortunate but I still miss the midwest too.

You should work for Discovery or the Travel Channel. And I loved the tour!

If you find who took your will power, let me know. I seem to be in Hoover-mode and just vacuuming it all in.

Beautiful pictures! My niece lives in Ft. Lauderdale and my best friend lives in St. Petes Beach. Never been to Florida though and someday i plan to do just that! I liked the guitar player...my favorite was his rendition of Joe Cocker's "Have Faith In Me"....pretty good. Ahhhh...the road to the rich and famous celebs huh? I've been down those roads in California. My brother who lives in Nashville...loves rubbing elbows with the music celebs...he's actually become pretty close with many. He's always getting back stage at concerts because of his connections and sending me emails with him and Elton or ??...and my sister in law there by his side smiling widely! One of his best friends is John Hiatt....they're at each others homes all the time. I don't get that excited about that kind of stuff...not sure why? Anyway...enjoyed your bike ride...thanks for taking us all along...pretty cool!

Perfectly beautiful! What a most perfect day...great pictures!

What a beautiful outing!! I listened to and enjoyed Rob's music. He has a beautiful voice.
Your entire trip was a joy for me..as usual.
We had a nice weekend too..but to tell you the truth...I honestly do not think T has ever been on a motorcycle in his entire life. Or much of anything else! Sigh..
But...I have you blog to enjoy and ...enjoy it I do! :)
smiles..and hugs.
Mona

Ohhhhh, great photos, especially the one with the canopy of trees which is also my favorite type of drive!

I've also visited some of the same places and you brought back lots of fantastic memories. Thanks!
jane

Very pretty area and I love the ocean/beach so I am extremely jealous right now. Looks like you had a great trip.

You're killing me with those palm trees and sunsets! I am STIR CRAZY!

I loved these pictures. HBL was looking at them along with me and he said to tell you "that looks like a really nice place". He still can't keep MHS and BN straight. He keeps asking if BN is your husband. I knew you'd love that. LOL

I am soooo jealous!! Beautiful pics

Beth-If you could get them to hire me, that would be great! I'm having a real problem with my willpower these days.

Debbie-You'll have to come down to visit your relatives one day. We could meet for coffee.
County music is my favorite. I would love to meet those celebs.

Smiles-It was a beautiful day.

Mona-We'll have to get you on a bike one of these days.

Jane-We have another canopy of trees on the back way from the grocery. That's my way. MHS always takes the highway.

Auntie-You don't have to hate me because I don't live in Miami. I'm about 2 hours north of there.

Delaney-It was great fun for us "old folks".

MLS-The BN would probably kill me if I were his wife. It takes a Saint.

WW-Still waiting for you to take your Florida trip.

Far Side of Fifty said...

Thanks for the tour! I can see why you like Jupiter Inlet..love the sunse also. Hey I thought maybe one of those Yachts were yours! :)

Wonderful wonderful pictures! Thank you for the mini-cyber-vacation!!!! I am just aching to come to Florida now!!!!

So glad you had a nice time!