THE GRINGA IN THE BACK 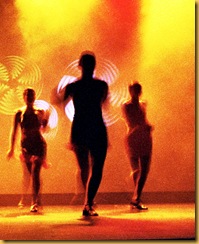 After the talk I had with myself on Monday, there was no getting around going to the gym after work. I’m usually able to get out of the office on Mondays at a reasonable time and make it to my favorite class, Latin Impact. It’s basically aerobic dance exercise using Latin music and Latin moves. The class is taught by a very nice woman who is incredibly fit and probably close to my age. English is her second language and most of the class is taught in Spanish. That’s OK with me because I’m fluent understand directional queues in Spanish like right, left, forward, back, look, Not that way, STUPID!

I didn’t make it to class last week but after taking this class the week before, I couldn’t walk without pain for three days. Yet another indication of how badly out of shape I am.

I should probably point out here that I have a fair amount of rhythm, I can dance. I’ve taken a few dance classes, performed in the Dolphin’s half-time show, had a part as a party guest in the Nutcracker which required dancing, etc. I’m not completely without any dance ability. Until.it.comes.to.Latin.moves. Ay Caramba! My hips just don’t want to move like that.

The class starts and I’m smiling, happy to be out of the office, and feel good about taking that first step to get back on the diet/exercise wagon. The instructor is a natural. She starts with the warm up and the hips are going. I’m enjoying myself and feeling pretty good about being able to keep up even if the hips aren’t cooperating. The class progresses into the cardio segment. She’s taking us all around the room, right, left, back and forth, diagonally forward and back, turning around. Oh yeah, Ms. Tiny Dancer loves to make us turn around and around to the point that I’m almost dizzy. The worst part about turning around is the wall of windows. I always stand in the back. I don’t mind if I laugh at me but I would hate to have to hurt someone don’t want others laughing at me. So around and around we go and don’t think for a minute that there aren’t men people suddenly lined up to use the machines right by the window. I smile as I turn because I’ll be damned if I’m going to show that I have no idea what I’m doing even though it’s quite obvious I’m nice like that.

By the middle of the class, I’m still smiling but I’ve figured out that leftover roasted brussel sprouts aren’t the thing to eat for lunch on Latin Impact Monday. I’ve figured out that the teacher doesn’t have a plan. I don’t think she has choreographed this class. But she has developed a strategy. “As soon as the gringa in the back figures out what we’re doing, change it.”

And as if it’s not bad enough that I’m the only one in the class whose hips can’t move independently from the rest of her body, I’ve got what appears to be blonde Cheryl Burke (Dancing with the Stars) right in front of me. The problem with having “Cheryl” in front of me is that I’m competitive a follower inspired by greatness. Having this woman in front of me raises the bar. I’m trying harder. And it ain’t pretty.

At one point in the class we were expected to shake our booty in a circular motion really fast while waiving our arms in the air in a opposite circular motion. What the……? While this might be attractive in a hip-hop sort of way on a young girl with a cute booty, on me……….not so much.It’s like that old pat your head and rub your belly sort of thing. I’m sure I could get it if they slowed it down to a waltz tempo but seriously….? Not happening. Let me tell you there is nothing sadder than a white girl desperately trying to shake her booty, waive her arms, while burping roasted brussel sprouts, attempting to do it with style like “Cheryl” and smile at the boys thru the window because everybody knows, “You never let em see you sweat”. Alas, the sweat, the terror on my face, and the complete lack of Latin vibe was all too obvious.

By the end of the class, I was no longer smiling, I didn’t care what the boys thought, I hated Cheryl and I was thinking very mean thoughts about Ms. Tiny Dancer. I stared at the clock, willing it to move faster so I could be done with this whole mess.

The class was finally over. Ms. Tiny Dancer thanked us for coming, praised us for doing such a good job and told us we were very smart women to be able to follow her directions. It’s amazing what a few nice words can do. I’ll be back next Monday. It’s my favorite class.

Fun story. Sounds like a fun class. I did a Zumba class a couple of time last year and it was a workout.

Too bad I can't come to class with you - I'd have stood right behind "Cheryl" and would have taken her out with a wave of fat that just happens to reside around my hips, ass and stomach the minute the booty-shakin' started.

Don't worry - I'd make sure you were a safe distance away.

I used to be a fit, able to dance well, skinny girl... Now I hate all them bitches.... LOL

I used to be able to dance. Back when I was young and fit and gorgeous - so it didn't really matter if I had rhythm or not - I still looked good.

Those days are over.

Too funny. But also sound like a lot of fun!

I've told you time after time to stop posting those picture's of my in my dance leotards.
Hell, I wish.....my thighs don't look like "that" and my ankles wouldn't even begin to fit in one of those lil dancing girl shoes. SIGH......

What a fun way to get fit. I wish I could say that I'd be joining you but since I would be another Grinka in the back, embarrassing myself to death... no way.

Man...that post inspired me. I'm getting up off my couch. I'm up! Yay! Okay now I'm walking across the room to my purse. I've got it! I'm out the door. Oh man that was tough. The hardest part is getting out the door and in the car. Starting it...pulling away. Yesss! We have lift off. I'm driving and oh, there's the turn the gym.... LOOK! Off to the left. Baskin Robbins. Ooooooooh yes. Mmmmmmm. One quick stop, then I'll go to the gym. 'kay? Yeah. Mmmmmm double scoop, peanut butter cup and chocolate fudge.

Ugh. I am too full to go to the gym. Driving home, staggering inside the house. I need to sit down. Ahhhhhhhh my couch. Laptop. Blogs. Yessssss.

(this kind of thing happens to me ALL. THE. TIME!!! I don't think my car can actually drive to the gym. There's some sort of force field that prevents it. Yeah. That's it. That's my story and I'm sticking to it. Heh.

High fives to you for going to the gym! I just can't do the public gym these days... when I was young and in better shape, not such a big deal. Now, too embarrassing.

Hmmm, it's Thurs and I still haven't lifted any weights or found those aerobic DVDs yet... my plan to start my regimen this week is falling apart... AGAIN.

Movie-I really want to try zumba but can't find it around here. I guess I will have to do the video. Maybe that could be tonite's entertainment for MHS and the Biker Nazi. LOL

Jan-You could have taken Cheryl out with your shovel. LOL And I have that friend with a gator pit, ya know.

Smiles-You need to get your butt down here and come to class with me.

Gaston-But we could have so much fun.

Mama-LMAO. Fortunately there is no ice cream store by my gym.

OzG-The thing is, I don't give a rat's patooty. I guess it helps that I don't know anyone at the gym as I go near work instead of home but still. I wouldn't let what other's think stop you from going. I have a hard time doing it at home.

I want to see the video Ms Brussel Sprouts ; -)

PS I went hiking with my friend P on Tuesday and she had to wait for me over and over again. The entire hike was friggin uphill...

I hate Cheryl too. Just for you.

The only way I could do that would be if I was in the back row, alone, in a different room, without music, in my dreams.

This post made me laugh out loud and thank my luck stars it's not just me who can't do the booty shake while waving the arms. Oh, and about those brussel sprouts....not good...not good.

OMGsh I laughed so hard reading this. I could just picture you in that class. I don't even have the guts to try it.

This was too funny. I so remember a few years back when I thought I could be a forty-something-year-old tap dancer. Even being in the back row didn't help. Loved the gringa line.