THE MAKING OF A BIKER CHICK - I’M GOIN TO JACKSON 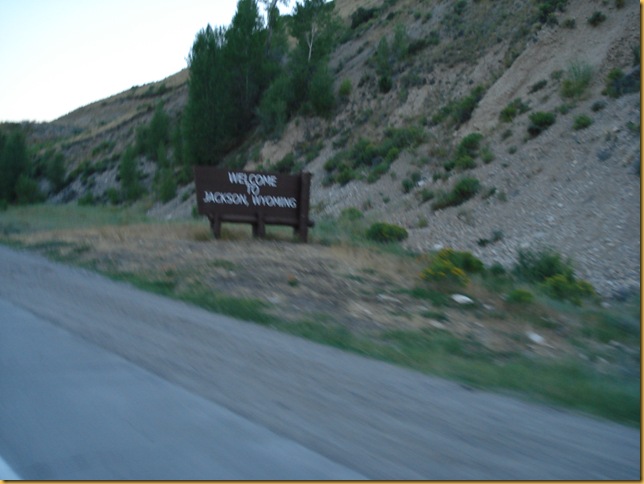 Most of my Biker Chick pics are from the back of a moving motorcycle. Sometimes, MHS forgets to slow down so I can get a decent shot. *sigh*

My last Making of a Biker Chick post left us in Cody Wyoming. From there we traveled west to Yellowstone National Park. We entered thru the East Entrance and wound our way down to the south entrance and headed toward Jackson Hole. (Yellowstone will have its own post, coming soon) I was really excited to get to Jackson. The Biker Nazi had told me that there were shops and shops and more shops there.

If you’re new to this blog and haven’t read previous Biker Chick stories, you should know that this trip was the first time I had ever traveled further than one hour in any direction from my home. While I was truly enjoying our adventure, I was more than ready to do something that didn’t include riding and anxious to shop for something that didn’t have HD stamped on it somewhere.

We got into Jackson just as it was getting dark. It turned out to be the only time our no plans, no reservations idea almost backfired. There were no vacancies every place we checked. We finally found one place with a room and two beds. We had to bunk together with The Biker Nazi and The Saint in pretty close quarters but it was better than sleeping on the ground so we took it. 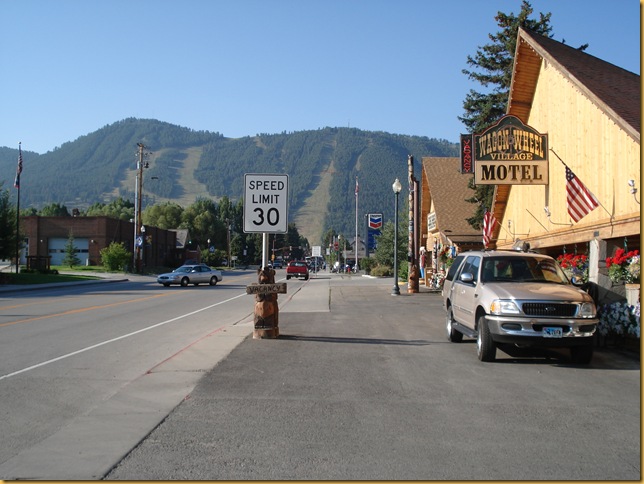 The Wagon Wheel Village Motel was a cute little place and it was clean. It was also within walking distance to restaurants and shops which meant we could get a butt break for the night.

By the time we checked in and showered, we were starving and it was getting late. We walked to the downtown area and ate in a Mexican restaurant that was OK but nothing to brag about. I can’t even remember the name but if you’ll take me back, I could find it for you. *wink* 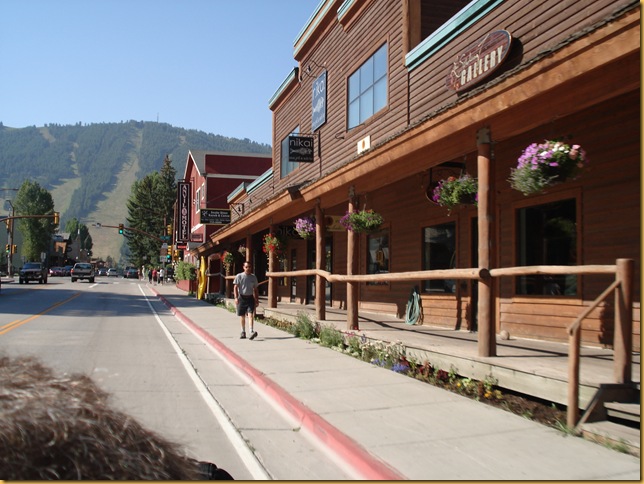 The shops were closing by the time we finished eating so shopping would have to wait until the morning. 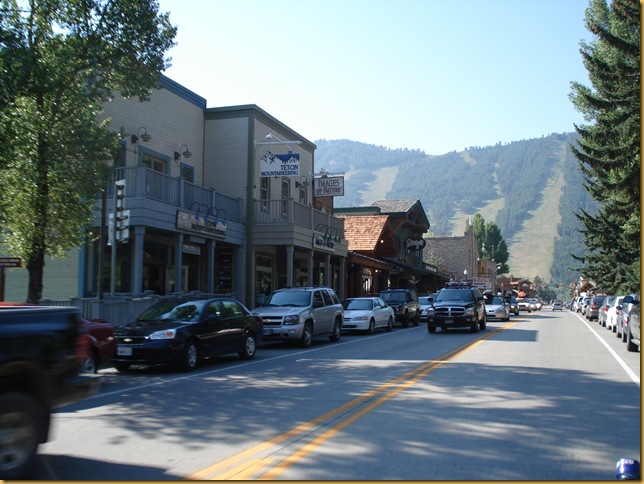 There was a discussion over breakfast the next morning where we determined that if we were going to make it back in time, we needed to move on. NO SHOPPING! I have to say that I was mad. I was sad. I pouted like a four year old. I doubt The Biker Nazi ever noticed, you can hide a lot inside a helmet but I blamed him. He talked up the whole shopping thing and then ripped it right out from under me.

In truth, it wasn’t his fault. But that didn’t stop me from blaming him. We had less than a week left and still had the rest of Yellowstone to explore, Beartooth Pass and a visit to MHS’s aunt in Northern Montana to go. In the end, we even had to cut out the trip to MHS’s aunt which was disappointing to us all. 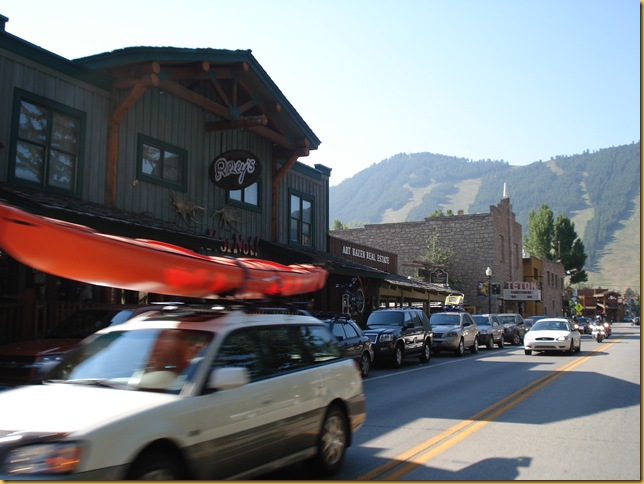 I didn’t get to shop but you can see that Jackson Hole is a very charming, quaint little village that just invites you to walk the streets in search of treasure. 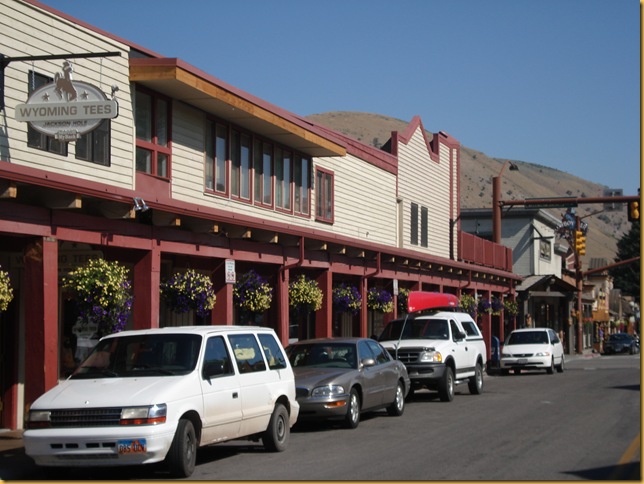 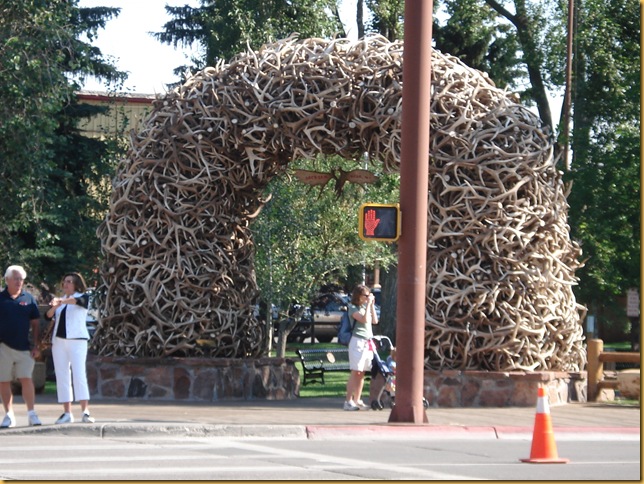 This arch is made of antlers. Pretty cool, huh? 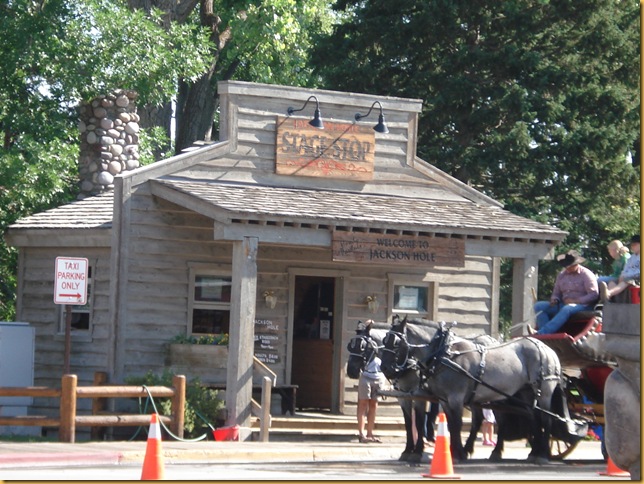 The thought crossed my mind to dismount our iron horse to take a stagecoach ride with these real horses. 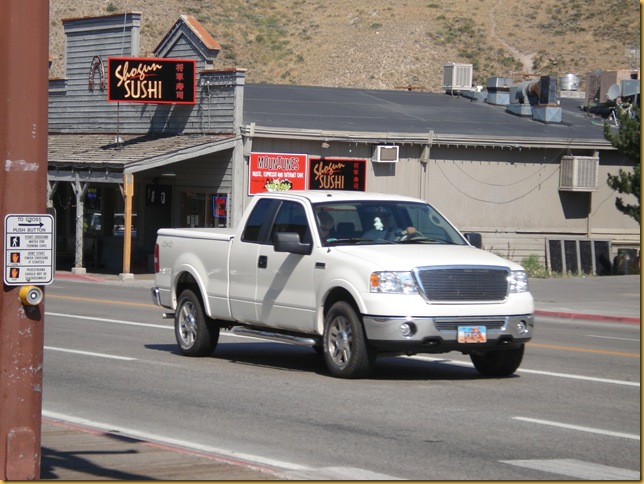 Look, Jan! There’s sushi even in the old West! 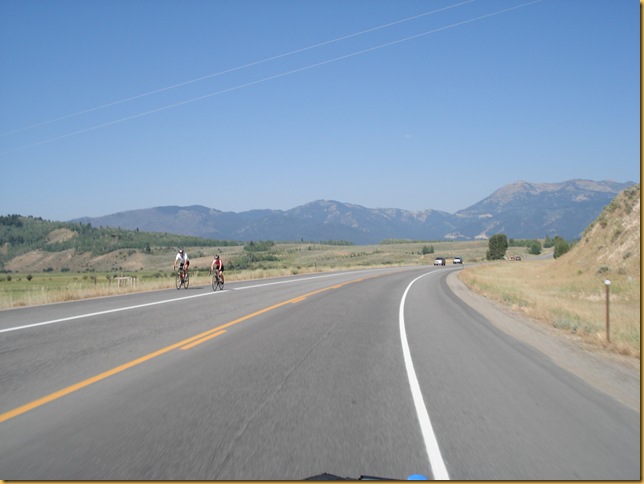 A different kind of bikers. 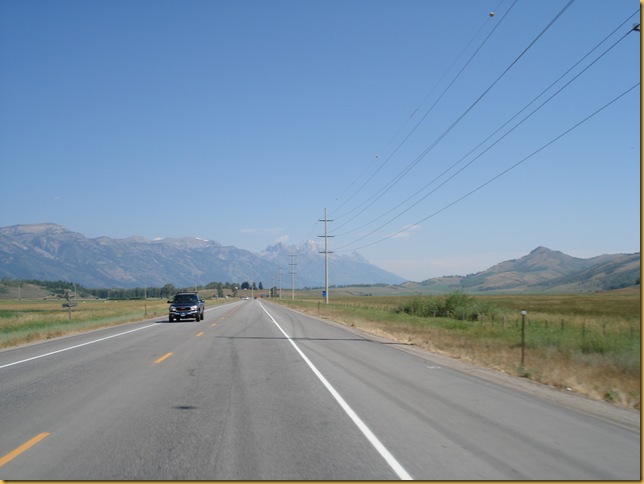 It wasn’t hard to forget my bad mood with views like this on the way out of town. 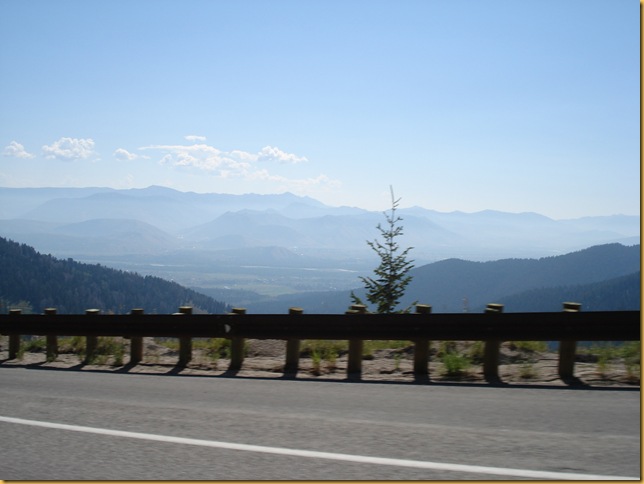 If you would like to read previous Making of a Biker Chick posts, you can find them listed on my sidebar.

Wow! What a cute town and I'm sorry you didn't get to shop. The antler wreath is very interesting. I can't wait to see the pictures of Yellowstone.

I've said it before and I'll say it again. I need me a road trip!! Oh, so jealous.

When i was young our family went road tripping every summer. Some camping. some motels. I remember Jacksonhole Wyoming was a total favorite. We stayed at a private campground and it had..... A POOL. Glory to god I loved that place.

Goodness gracious - our road trips are only a few hours...

That antler things was sorta weird.

Sorry you didn't get shopping, but thanks for sharing your fabulous photos.

Deb-Yes, please come back for Yellowstone. They are my best pics yet. It may take more than one post to get it all in there.

Pseudo-We're going to have to go back one of these days.

Movie-My roadtrips are usually only a few hours too. This was one of those once in a lifetime (so far) trips.

That is the neatest, quaintest little town - I love it! And I can't wait to see the pics of Yellowstone; it's been about 30 years since I've been there.

And of course they have sushi. Everyone loves sushi. :P

Thanks, I needed a ride this morning. Jealous, as usual. :)

Love the pictures! Thanks for sharing your adventures with us!

Love the photos and the quaint look of the town! Are those roads going up the mountains or just cleared spaces for utility lines?? Got my curiosity up here.

Love Jackson Hole! It's been 25 years for me.
Biker Chick want to be dumb question. WHERE to you put the stuff you buy when you shop? Those saddle bags aren't very big.

It is purdy there. I need to see mountains every day of the year. I find them to be rejuvinating, so I could never move back to the midwest where I grew up where the land is flat.

too bad about not shopping. but you took some AWESOME pics. the antler arch is great. and those mountains in the background of the town. wow! and who knew about the sushi place. i love sushi with some white wine.

I miss the states.

I remember those antlers! Our high school band went on tour every spring. One year through Wyoming. The band director took my boyfriend's (now husband) pants away from him when he snuck out of his room to come to mine. Innocent days, actually. Fun, though. Great pictures. Town hasn't changed.

I love your road trips! I really feel like I'm there, sorta......then I get jealous cause I'm not!

The town was beautiful, the antler arch wasn't. LOL

Gorgeous, gorgeous, gorgeous! I love the photos! How awesome for there to be sushi. And a Ripleys! I want to go on a rode trip with you. You can ride shotgun in the car...

Jan-Shogun Sushi! It struck me as funny.

Lisa-Don't be too jealous as the trip as two summers ago and I haven't been on anything like before or since.

Fancy-I'm just happy to have something to do with the 1000+ photographs I took. LOL

Linda-I'm sorry to say that I didn't allow for much shopping when I packed. I chose small items and clothing that would roll up in our small bags. If you've seen pics of the bikes, we had two saddle bags, the tour pack, another pack strapped onto the tourpack and a duffel in front of the handle bars. We looked like Beverly Hillbilly bikers. LOL

Di-Yes, I love the mountains too. I'm not sure how I've managed to live my entire life in two places that were really flat.

Namaste-In retrospect, it saved me a lot of money. :-) It really wasn't the BN's fault but I blamed him because he got me so excited about shopping. LOL

Michel-Maybe we should go back and see if that mediocre Mexican restaurants has improved on their margaritas?

Tricia-It was. I hope we're able to do another soon.

CC-Do you know that no animals were harmed in the making of the arch. They lose their antlers and grow new every year.

Beth-Sounds like a great plan to me but I have to admit that I saw so much more on a bike. If I'm in the car, I'm usually sleeping, talking or reading. I don't notice much outside the vehicle. *sigh*
Beth

Oh I'm so jealous. Ohio is as far west as I've gone. I desperately want to go out west.

Ski runs, who'd thunk? Certainly not little old me who's never put on a pair of skis.

Left you something at my place; please come by to pick up.
Jane

I love your biker chick posts, it so takes me back to WY and Yellowstone! Although I never made it to Jackson -- wanted to, just never got there, due to the reason you stated. It's a longer drive than it might seem; those twisty, turny mountain roads make every drive take forever!

So we'll keep Jackson on our bucket list, huh? :)

I just read the latest OFHA report on First Quarter 2009 home sales, appreciation and depreciation by region, state and city. Do you know Wyoming has experienced the greatest price appreciation of any state in the U.S.? I believe that is over the past 10 years. I didn't think anyone lived there! hahahaha