THE STORY OF US – High School Sweethearts…….or not 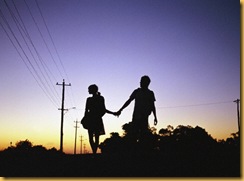 You might think that after our little adventure that landed us in “jail” that my parents wouldn’t allow me to spend time with a scoundrel such as My Harley Stud. Or that his parents wouldn’t want him seeing a girl that landed him in the “pokey”. Fortunately for us, neither set held a grudge and both held their own child completely responsible for their own bad behavior. As it should be.

But that was middle school stuff. As we moved on into our high school years, we were much smarter and didn’t get caught more mature. MHS and I dated off and on all throughout high school. Really more off than on. We both dated other people but there was always a strong connection that couldn’t be denied and we remained friends when we weren’t dating. But sometimes when I would see MHS while I was on a date with another boy, I would drop my date’s hand so as not to appear too into him. And other times I would pretend to be even more into my companion than I really was just to see if MHS would be jealous. Years later, MHS confessed to doing the same thing when he saw me.

MHS had one girlfriend with the same first name as mine. I know……..another Smart Mouth Broad. Hard to believe. The other SMB (as if) was a year older than he is. I am a year younger. I remember thinking how cool he was when he told me that he was sending her 18 red roses for her 18th birthday even though I hated the bitch. Everyone knows that you only send roses by the dozen unless it’s a significant number for a special occasion. (or so I was taught by my US History teacher who sent dozens of roses to Jane Pauley in a lame attempt to gain her attention. – Sucker!)

Another girlfriend was on the gymnastics team with me. We were chatting one day while taking a break or should I say I was being interrogated on all I knew about MHS. I mentioned that I thought he was quite a romantic and illustrated my point with the 18 roses for the 18th birthday story…………………..How was I supposed to know that he had done the same for her 18th birthday? He doesn’t tell me EVERYTHING! PS. My eighteenth birthday……………….no roses.

Dating or just friends, MHS was always there for me. One spring I was riding with two girlfriends when we met up with their boyfriends on motorcycles. Next thing I knew they were on the back of the bikes and throwing me the keys to the car. It was a Datsun B210. A stick shift. I didn’t know how to drive a stick. I yelled this little piece of information to them as they pulled away and I was told, “Live and learn.”

Somehow I made it to the QuikMart where I found MHS. He took me out to the country roads and taught me how to drive a manual transmission. To this very day, I’ve never met a gear shift I couldn’t handle.

The summer before my sophomore year, I was with my cousin in her car. We were doing a little harmless flirting on the CB radio when we were rear-ended at a stoplight (the only one in town) by her boyfriend who was listening in his mom’s car. Again, I was abandoned while she went off with him to fight it out. I was instructed to drive around until she came back. While I did have my learners permit that allowed me to drive with her in the car, I didn’t have a drivers license. Hours went by and still no sight of her. I couldn’t go home because we would both be in trouble that I was driving her car. I couldn’t go to her house or she would be in big trouble. That was when I ran into MHS and the Biker Nazi who were out running off some “bad pizza” before they went home. (Bad pizza was MHS’s excuse for getting sick from teenage drinking)

MHS ditched the Biker Nazi in favor of keeping company with the damsel in distress. He passed out almost as soon as he got in the car but it’s the thought that counts. At least he didn’t get sick.

It’s always an adventure with MHS too. One winter he and the Biker Nazi took the Saint and I sledding…………………….behind his 4wheel drive truck. We actually wore through one of those little metal saucer sleds. But we were having way too much fun to give up. The guys put their heads together and came up with a plan. We went back to MHS’s house and he took the hood off his little brother’s car and VOILA – a sled for two! Don’t try this at home. We’re professionals, you know. We wore helmets. And we only ended up being thrown into a corn field once or twice.

It wasn’t until the summer before my senior year that we finally got together for good. But that is a story for another day.

Catch up on prior episodes:

The Story of Us

The Story of Us – Arrested Development

Always save your work. *wink*

Labels: story of us, True Love

Well, if he was always there when you needed him, you were touched by an angel. . . aka your soul mate!

How interesting that he gave the other girls 18 roses for 18th birthdays and not you. Makes me think he thought you were unique and special. . . he didn't want to use the same pick up line (with flowers)! He was into you!

I love your story. You make me wish I had grown up in a small town. They should make your story into a CW TV series. It's better than Gilmore Girls.

Aw. What a great story you've got going there. I expect it only gets better!

I can't wait to hear the next chapter of this one.

Oh, I love these stories! So much fun, SMB. I love that you have so much history together. Thank you for sharing.

I need to go back up all my files now.

The hood of a car for a sled? Pure genius!!!

Wonderful stories...wonderful memories. I love love love reading about you and MHS...cuz I know how things turned out...Beautifully!

You got no roses on your 18th birthday and he's still alive??

You really DO love him, don't you?

Oh, and the car hood thing? Those fellas rock.

Sounds so destined to be great!

My Man and I were young lovers, who somehow married other people. We got back together after divorces. I believe in True Love.

Great Story I enjoyed it very much, but I have to ask what the brother said when he got his hood back...It also sounds just like my family, except trade the snow for flooding rains and skiing behind the truck with a rope down the middle of the block :-)) Good Times

AAAAwwww! How sweet, makes me remember the good ole' days! Hurry with part 3.

I love your story! I'm looking forward to the next chapter - how cool that you have some awesome memories! Well, mixed with some not-so-awesome... ;)

The hood of the car as a sled? Pure genius! :) And I agree with Pastor Sharon - no 18 roses on your 18th birthday was because he cared about you more. ;)

Great story. I will be back to read the other two and eagerly awaiting the next installment!

This is such a great story; I love hearing about high school sweethearts that last.
So glad you did not self-destruct when you didn't save. I don't know if I would have had your control...

how sweet- you can tell he was totally crushing on you since middle school days- or is it pre-k?

that is one cute story!

My friend, Medora (she comments on my blog), and I have gone in and out of being friends forever. Interesting that we always find each other again like you and your husband. We just started talking more since I have been blogging.

You were just meant to be. I really like this!

Datsuns, CB radios, you are definitely my generation!!! HA! I learned to drive a stick, in the same way that you did! I had to get somewhere, and I had no choice!

"He passed out almost as soon as he got in the car but it’s the thought that counts." HYSTERICAL :-))))

Oh how romantic! You and your hubbs have known each other forever!
BTW, I went back and read your April 13 post...at Cokeman777's suggestion. He and I had fun tweetin' about you today. xo

If I lay in bed any longer I gonna get bed sores so I made my way to my computer ...and here of course.
EXACTLY what I needed! A bit of all American teenage drama! I loved it! It's like a sneak peek at what my own were doing, probably worse, at the same time you and MHS were romping around. Like the prom that was never attended by D2. (that story has still yet to surface! Lots of holes in it!) :) You two were such typical teens and meant for one another totally! Cute, cute, cute! It will never be dull with the two of you! Never!
I will catch up asap!
Love and hugs~
Mona

What a great, classic love story!

Aw, a lovely love story. Filled with adventure also. Makes it even better.

I like the part about holding hands. And no roses for you - you obviously were worthy of much more than 18 roses.

I fell onto your blog by accident. Don't worry. The bruise will heal and I'm not the sort to sue. I don't know you yet, but will by the time I read plenty of past posts. I count us both lucky to have an MHS in our lives. Like lifesavers, only not orange, and bulgy...and with those velcro things..

Glad you're saving this time! And I love the title Arrested Development. Damn, sounds like a television series!!

Flowers - schmowers - who needs them?
You got the man - much more important
:)