THE MAKING OF A BIKER CHICK - Custer, SD 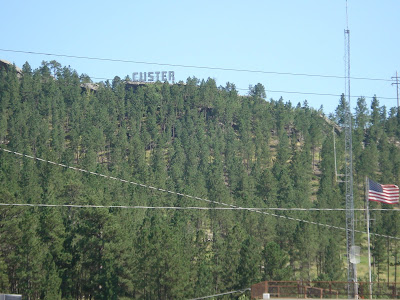 I kind of left you hanging with my last post about our bike trip out west. The holidays crept up on me and my biker chick story just got pushed to the back burner. What did you say? You weren't sitting on the edge of your seat with anticipation of my next biker post? Oh well, I will proceed nevertheless.

Since it's been awhile a little recap may be in order. If you're new here or one of my more forgetful readers or you just loved it so much the first time that you want to go back, here are links to the previous related posts.
THE MAKING OF A BIKER CHICK

THE MAKING OF A BIKER CHICK - The Badlands

We left the Badlands after breakfast and headed North toward Custer. As previously mentioned in the first two posts, it was hot. We all made the choice to forgo the safety feature of wearing long pants and opted for shorts and tank tops. We arrived at Mount Rushmore in the early afternoon. The Biker Nazi was excited to take us all around the mountain to show us the different views. We had plans to go the presentation that evening so we didn't actually enter the park. Mount Rushmore is so impressive and inspiring that I think it deserves its own post so that will have to wait for now.

By the time we made it to Custer, I was starving. The BN wanted to return to a restaurant where he had eaten on a previous trip and he didn't let us down. We walked into the Sage Creek Grill and were told that there would be a short wait. We all used this opportunity to freshen up in the restrooms. We had been riding in the heat all morning so we weren't exactly fresh as daisies. Once in the ladies room, I refreshed myself by throwing some cool water on my face and wiping down my arms and neck with a wet paper towel. It was then that I noticed just how dirty my legs were from wearing shorts on the road. I tried wiping off some of the road dirt but it would just smear. UGH. Talk about disgusting. I was finally able to get the water warm enough and with paper towel and soap, I gave myself a spit bath in the ladies room. This lesson was not lost on me and I didn't wear shorts on the road again regardless of how hot it was.

It wasn't long after I returned from the ladies room that we were seated. The service was great and the food was superb. I had the open-faced salmon sandwich with havarti-dill sauce. YUMMY! Granted I was so hungry that anything would have tasted good but I've linked the reviews so that you can see it wasn't just me. After satisfying our hunger, we asked if the server could recommend a place to stay. He explained that he was new in the area but would ask another server who was a native resident. I don't remember her name but a very nice woman came over to our table and gave us the name and number of a local motel. She told us to mention her name and said as long as we weren't looking for anything fancy, we wouldn't be disappointed. And it would be the cleanest place we've ever stayed.

I called The Valley Motel from the restaurant. The owner/operator answered the phone and assured me that she would get our rooms ready. She didn't want to take any credit card information to reserve the room. She said, "Your at the Sage Creek Grill? Just finish your meal, relax and I'll have everything ready when you get here. " Huh? It's been a long time since I've done business on just my word alone. I liked this place. 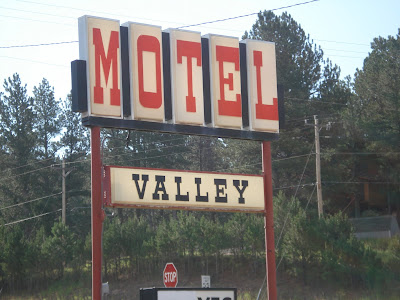 The owner (I forget her name) was a delightful woman with a wealth of knowledge about the area. We enjoyed getting to know her while we stayed there and found ourselves seeking her out for information and just to chat several times. It seems that quite a few of her visitors are repeat offenders. I can see why. If I ever make it back, I will definitely stay at the Valley Motel.

The server was right. The rooms were simple but as neat and clean as I've ever seen. We wasted no time showering and taking advantage of the opportunity to sit and relax for a bit.

With clean bodies and refreshed minds, we decided to go back into Custer to see the sights. 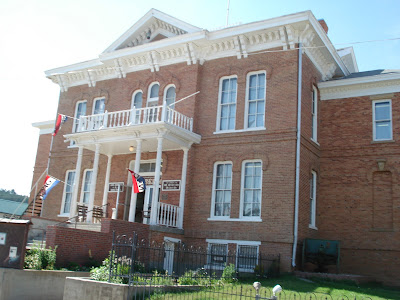 This is the historic Custer County Courthouse which is now a museum. Custer is the oldest city in South Dakota. This building was built in 1881. If you would like to learn more about Custer, click here for the link. 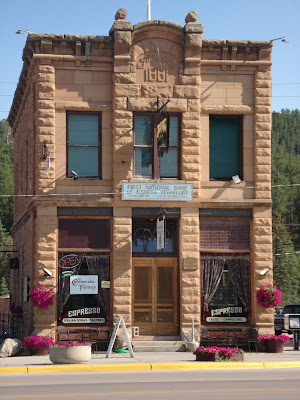 I love the look of this old building. We didn't partake of the Cheesecake or the espresso offered in the window but it sounds good, doesn't it? 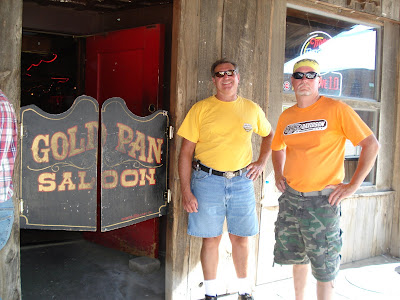 Who are these two rascals? 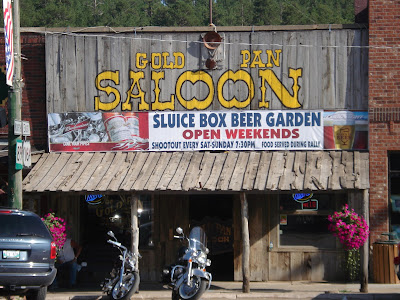 We returned to this saloon later that evening after the presentation at Mount Rushmore. The Saint and I made a couple of new buddies there. There's nothing like new drunk friends. 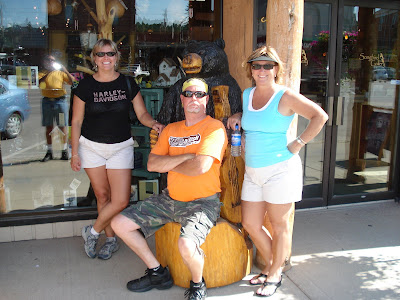 You can't really see it well but the Biker Nazi is sitting on a bear chair made to look like the bear is grabbing him. I guess that explains his grim look. 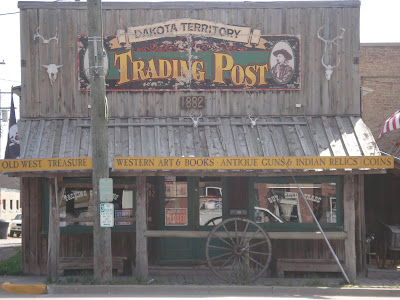 This trading post was across the street from the bagel shop where we ate breakfast. It wasn't open yet so we weren't able to go inside and take a look around. I guess that antique gun will have to wait.

I didn't get a picture of the "bagel shop". I guess that's what it was because that's what it said in the window. But my New York and South Florida readers will laugh to know that they were serving Lenders from the freezer. (Not that there's anything wrong with that) And they were out of everything but cinnamon raisin. They did offer other breakfast items too. I can't complain because it was my idea to go there because I thought it would be quick, simple and get us back on the road. (Not that I was in any hurry to leave this sweet little town but we had places to go.) 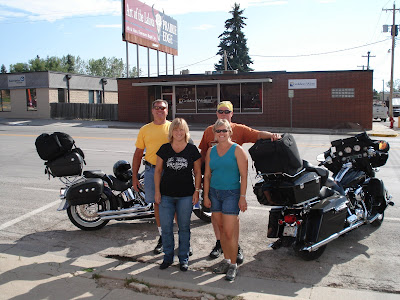 The woman at the bagel shop was kind enough to come out and offer to get a picture of all us before we set off to our next destination. 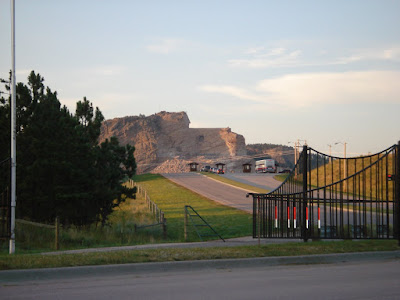 Before we left the area to move on to Deadwood and Lead, we stopped by the see the Crazy Horse Monument which is still under construction. This is not a very good picture but if you look really closely, you can see Crazy Horse's profile.

My next Biker Chick post will show you our Mount Rushmore experience. It was one of the highlights for me. But I'm an American History geek.
Posted by Smart Mouth Broad at 4:53 PM

Love the cheesecake building... did you go inside and was it still quite authentic looking or all remodeled?

Great photos and I loved the old buildings. Sounds like you go on some great bike adventures! I look forward to more of your fun.

I think you have wayyyy too much fun! I love finding place like you mentioned in this story and I love meeting new people. Makes the fun that much funner! Great pictures!

"As previously mentioned in the first two posts, it was hot."

I want to be hot. It got up to a blazing 5 degrees here today.

And now I want to go to Custer, SD just so I can go to the Sage Creek Grill and the The Valley Motel.

Oh my lord, I LOVE saloons. So jealous!

That was such a cool post. I'm all about travel and particularly enjoy our own country so I'm lovin' this!

So you really took a bath in the sink at the restaurant? Hmm.......you really ARE a biker chick. *wink*

I want to go there now too. Jan, when can we leave??

Sounds like so much fun. Can't wait to see Mt. Rushmore.

I LOVE the photos of the buildings. I am a total architecture nerd. Good ole American History is awesome, especially to see it first hand. Looks like a fun trip.

What a great thing to be able to do. I always did want to get a few bugs in my teeth. It makes you feel so good when you meet such nice people and you know you probably will never see them again. I enjoyed you taking us along. Thanks! You looked like you were having a great time.
Dirt on the legs..now THAT was my favorite part. :)
Mona

Di-I'm sorry to say that we didn't go inside but wish we would have.

YC-This was a first for me and we haven't done anything like it since. Someday.

Smiles-I don't know about that. Can you really have too much fun. Actually that was our first real vacation in 26 years. It was fun.

Jan-When I got your comment, I was thinking that you might want to wait until summer as I thought Custer would be even colder than 5 right now but I had my weatherman check his phone (He keeps Custer weather programmed) and he said it was 43 yesterday. Heat wave!

Lilu-This really looked like an old west saloon inside too. Well at least like what we see in the movies.

BV-I would like to be able to claim that I've been to all 50 states someday. Something you've already accomplished.

MLS-*sigh*, Yes, I guess I really am a biker chick. Ugh, I can't even tell you how mortified I was to see how dirty my legs were and then even more so when it appeared it wasn't going to come off without industrial strength cleanser. I managed tho. That's what we do, right. And I did a pretty good job at that.

Debbie-Thanks for visiting and I hope you'll come back again.

Binks-MHS and I both love old architecture. I wish I had been blogging then. I would have paid more attention to the composition of my photographs, I think.

Mona-Ewwww! No bugs in my teeth. We have full face helmets. They are annoying sometimes. It makes it hard to communicate or even take a drink of water but I'm still glad that we have them. I think the first time I got hit with a bug in the face I would be done. I'm a sissy like that.

Looks awesome....especially considering that we're in the midst of a arctic snow storm up here in Maine! ...seeing you guys in shorts makes me ache! ...as I type (in my house) I'm in four layers of clothing!!!

I'm jealous all over again. I need me a road trip.

I loved this post,pictures, humor. Keep it coming.

that's you??? you're so small and cute!!! aw. :) hehehehehe. so glad you went on this trip. i, too, am a sucker for history. sigh. i once went to the Plymouth settlement..... and lemme tell ya, to this day, i still remember it and want to go back. i also make my husband stop everytime we travel by car and i see an 'indian reservation settlement' sign.... you know... the ones with the buffalo viewings? yeah. i make him stop. and go in the shop. so ican buy yet another tacky magnet. i just LOVE IT.

JeanMac-Stay tuned. There's lots more. It was a 10 day trip.

Lo-Awww, you're sweet. You might want to get your eyes checked though.