And so it goes in SMBland.

I recently won not one but two giveaways. I’m not sure what’s going on with my luck lately but with all this winning going on, I’m thinking that it might be time to buy one of them there lotto tickets. Allow me to gloat about display my prizes.

First Oz Girl over at City Girl Moves to Oz did a giveaway and I won because I was obnoxious and commented like a lunatic. Oz Girl aka GirlTornado on twitter is a dear friend of mine and I was thrilled to be gifted with some of her artistry. You see, OG has created her own custom postage stamps and cards. I told her that I didn’t want to use them and would save them. She has encouraged me to use them. We’ll see. I’m not sure that I can part with them. Take a look: 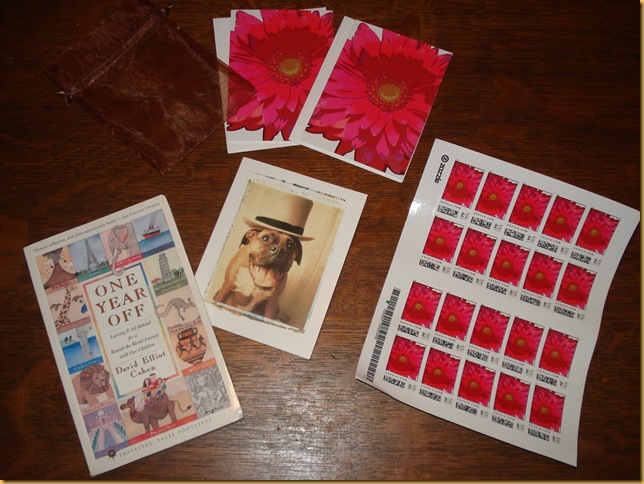 The card in the middle with that adorable pooch was her personal note to me. The book, One Year Off was also included in my prize. This could prove to be dangerous. The story is about a man and his family who sell all their belongings and take off to travel the world for a year. That sounds very exciting and quite tempting. If you never hear from me again, I’ve decided to jump on that idea.

Thanks, Oz Girl! I love my great prizes!

It wasn’t long after being notified that I won Oz Girl’s giveaway that I was told I won over at Pseudonymous High School Teacher’s place too. Pseudo has been a blogging buddy of mine for quite some time now. Her giveaway was a little different in that she didn’t have the prize ahead of time. She waited until she knew who won and then went shopping and posted about it. Pretty cool, huh? She was very careful not to disclose the end results so it would be a surprise. Let me show you what I got: 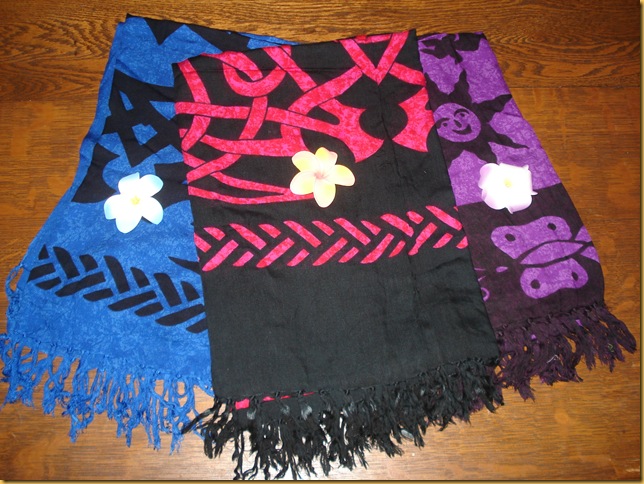 Look at these beautiful sarongs aka pareo in Hawaii. My photography is lacking and so you can’t see the colors but those flowers are color coordinating hair clips. I believe the flower is plumeria, a favorite of mine. Pseudo is one smart woman. She knows that I have two daughters and so she sent a pareo for each of us. If you have daughters, you know that anything as cool as these lovelies will disappear quickly into the closet of said daughters never to be seen again. Now everybody wins. Yay!

My great plan was that we would model these sarongs for you and I would post them. They are so versatile and forgiving, I wanted you to be able to see just how great they look when worn. This is where that quote at the top of the page comes in. D1 is getting ready to leave for San Diego and D2 is helping her pack. Another great idea bites the dust. *sigh* Well another time, maybe. I’m sure I’ll be taking one of these beauties on my next beachwalk. 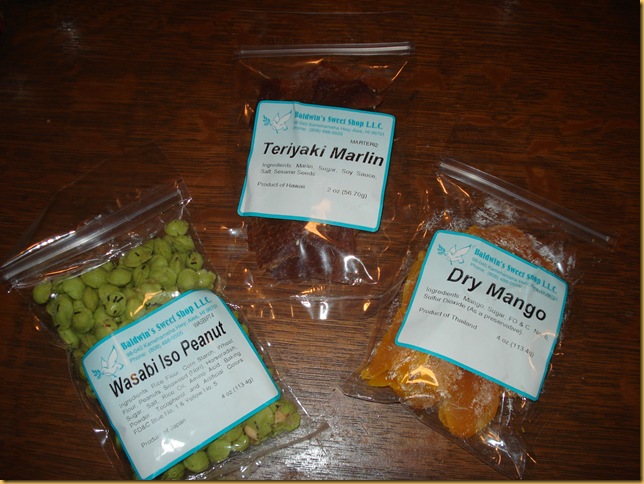 Inside the box, I also found these. My brother, Smitty lives on Maui and I’ve had the wasabi peanuts and the dry mango before. Yummohhhh! Now the terayaki marlin is a new one for me. I’m always game for trying new tastes. I wonder how these will fit into the DAMN ZONE? Well, the food nazi will be away for a week or so……………..what she doesn’t know………………….Shhhhhhhhh. 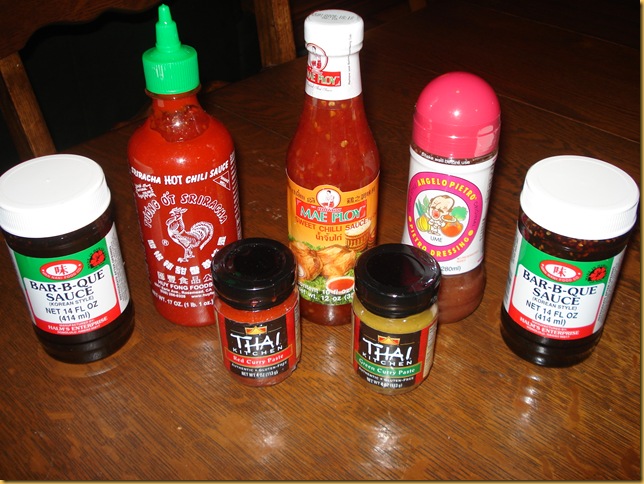 And LOOK at this! I can’t wait to get my creative side shakin’ in the kitchen when I try out these new flavors! Too fun! 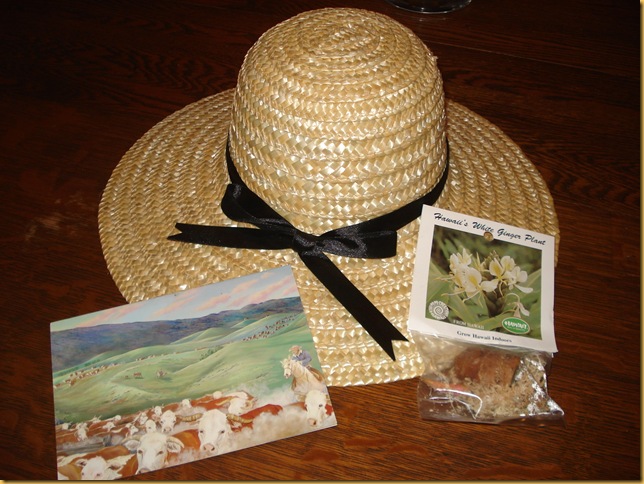 The card is Pseudo’s personal note to me. Pseudo doesn’t know this but I used to collect cows. All things bovine. I stopped because I didn’t like the idea of every time one of my friends saw a cow, they thought of me……Not very flattering, right? (Now I collect angels………you know because I’m so pure of heart and all) But I still have a strange affection for these creatures. Another prize was this white ginger plant. I’m a little nervous about this one. I’m going to plant it soon but I hope it thrives on neglect because that’s the only kind of plant I can grow.

Last but not least, I also received a cd compilation of Pseudo’s summer mix. Doing housework this weekend was made much more pleasant while listening to this great music.

I should also mention that the girls bought the hat in the above picture for me this weekend after I received the sarongs. They thought a new straw hat was just the thing to compliment my new beach look. Now if I could just get the weather to cooperate, I could sport these new duds at the beach.

Thanks, Pseudo, for my awesome prizes!

I know that these items were prizes that I won but they are so special to me because they came from two great friends I’ve met in the blogosphere. You guys are the best!

Please don’t hate me because I’ve got all this cool stuff. Come on over and I’ll share.

Wow - congratulations! You're hauling in some great stuff!

WOW!! Congrats! Those are some great prizes. I need to shake your hand so some of that luck just might rub off on me! Hoping for some great weather for you!

You go gurl!!!! I know. . . that is so "last millenium" to say that! but I just couldn't help it! What with all those gifts. . . you did some serious game playing to get cool prizes like that!

Now about cow collecting, you know that made me laugh! But now that you are collecting angels, in all, I thought maybe you'd like to join my praise team, down at the church. . . I could use another Halo in the choir loft and I betchu can sang up a storm! but you have to wear that, Hawaiian thingy when you come. . . I'll need you to leave that in the offering plate. Give it up for Jesus. The pastor needs to look good! (joking) Anywho, I'll check in later. . . I have to go check on our other friends!

love love LOVE Wasabi nuts!!! And all the other stuff, too - gorgeous fabrics, and the stamps are beautiful go ahead and use them - you have pictures to show how pretty they are - why not spread the love? lol Good haul! :)

Oh, all of that stuff is so COOL!

I can't wait for the pic of you in one of the sarongs - you've got more guts than me!

Go buy that lotto ticket girl; you're on a roll!

Really cool prizes, especially that Pseudo bought the sarongs personally for you and I LOVE new new hat your girls selected!

Not jealous at all, nu huh.

What cool bloggy goodness. Thanks for sharing your haul with us, SMB. I love that Pseudo got stuff for the girls too. :-)
(That Pseudo, she's a nice one).

Very cool stuff! Congrats on all your winnings...with all this good luck you really should go buy a lottery ticket or something...lol. Now I am waiting to see a picture of you gals in your sarongs!

Remind me never to enter a contest that you have entered because it's a given that you will win.. *sighs.

Dang, you cleaned up on those two giveaways! I hope you ran down and bought a lottery ticket too. I also hope you remember that sharing is good. Last but not least.....I hope you remember us "little people" who aren't so lucky. *hint hint* I'm talking about your lottery winnings. :)

Absolutely wonderful! Congratulations! I love that they came from friends and I love the way you described everything.

You're a lucky lady!

Congratulations! My goodness what wonderful things you've won! It's so funny--up until last night I have rarely won any kind of contest or drawing.

Yesterday evening was the last day of a 10-week class my husband and I have attended. My darling husband won a $40 set of really good vitamins. I won a candlelite aroma diffuser...and (drumroll) a $50 gift certificate to a grocery store which features all organic goods. (grin)

Woohoo! Isn't this great? What fun, eh?! And how fabulous that you have such great friends, my dear!

Yes, you need to get a lottery ticket... and I am so damn jealous.. I am leaving.. I said good day!

Woo hoo, you sure scored with Pseudo's big package! :) I love those pareos, absolutely gorgeous. Good thing you won those -- they don't sport as well in the pasture. Goodness, what would she have picked if I had won? A new manure shovel?? LOL

You have definitely been on the winning train lately and thanks for sharing your bounty with us. Now I'm envious as hell but that's okay.

You got the best gifts!! I LOVE everything in the photos....just beautiful. Are blog buddies the greatest? That bottle of sweet chili sauce is a must have in our house. We get it at a speciality chinese shop in Portland...it's fantastic. And...I LOVE Wasabi ANYTHING! Congrats on your wins...you definitely deserve it...and I think of you as an Angel...so that all makes sense.:)