THE MAKING OF A BIKER CHICK - Deadwood and Lead 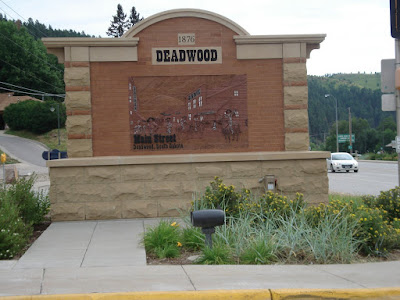 We arrived in Deadwood mid-afternoon. It was drizzling and we were hungry. We parked the bikes and started walking to find lunch. We had burgers in a bar on a corner. How's that for a great review with lots of information. Try to remember that this was over a year ago and I didn't even know what a blog was then. My documentation skills were not as honed as they are now. *wink* By the time we were finished with our meal, the precipitation had ceased and the day was starting to look like it was going to be beautiful again. 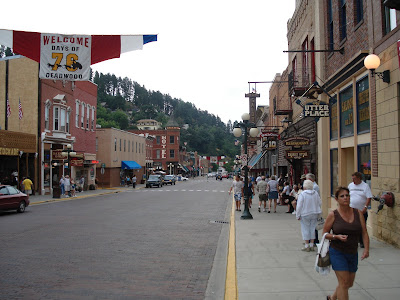 We walked all around historic downtown Deadwood. This is a town with a lot of history and I recommend if you have the chance that you check it out. You all know how to google, right? Take a look-see and you will find all sorts of fun things like the gold rush, old west shoot-outs, Wild Bill Hickok and Calamity Jane just to name a few. 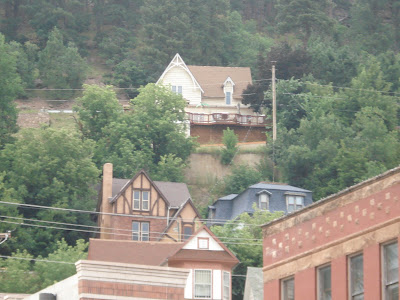 Both Deadwood and Lead are built right on the mountain. Houses are built on narrow streets with the next street up several feet giving the appearance from below that the houses are stacked on top of each other. This photo was taken in the town of Lead while we were riding through town. It's not very good but will give you some idea of the view. 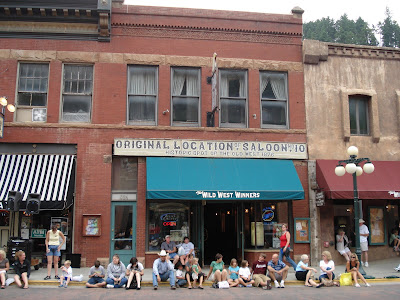 Every afternoon, Main Street is closed and people line up on the curb to watch a staged Old West Shoot-out. The Saint and I planted ourselves across from the original location of Saloon #10. It is the historic sight where Wild Bill Hickok was shot. 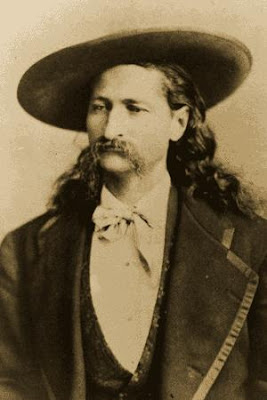 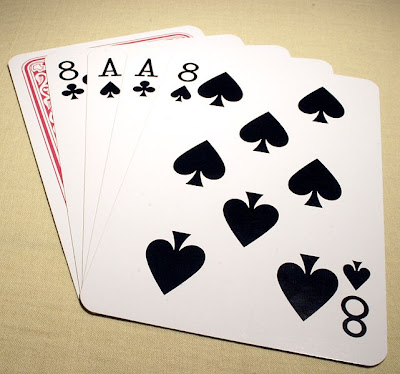 These were the cards he was holding at the time of his death. The famous Aces and Eights. Also known as the Deadman's Hand. 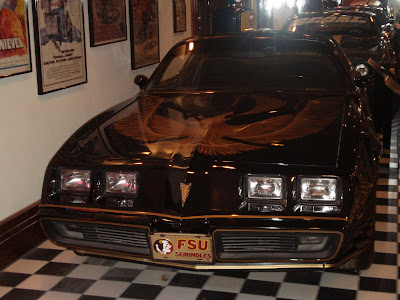 While The Saint and I saved our spot on the curb for the shoot-out, MHS went exploring and found this car museum. This is the original trans-am from Smokey and the Bandit. The invoice is taped to the window showing it was sold to Burt Reynolds of Jupiter, FL
Note the license plate on the front of the car. Burt, an old Florida boy played football for FSU.
Go Noles!


**Note**
My camera battery died before the shoot-out. *sigh* This was the last picture that was taken that day. 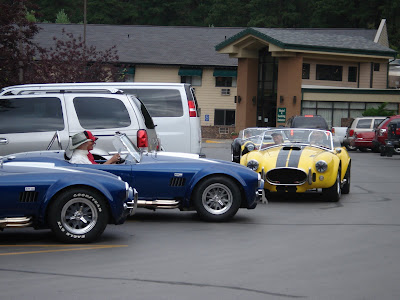 Look at what we saw when we pulled in to a restaurant for breakfast the next morning. 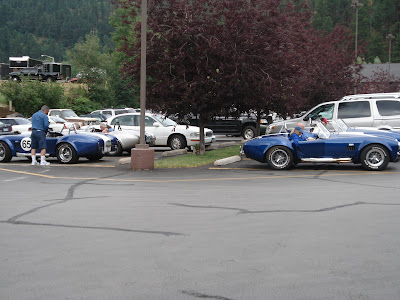 MHS's brother has a Cobra so we couldn't resist getting these pictures to show him. 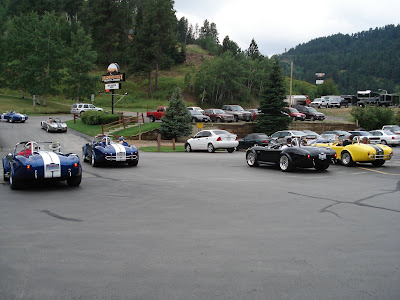 
I marched myself into Walmart on the way to Devil's Tower later that morning and bought an extra battery for my camera. I wasn't going to make that mistake again. Stay tuned for my next installment: The Making of a Biker Chick - Devil's Tower. It was one of my favorites on the trip.

If you missed the earlier posts from this bike trip and are interested, I've listed the links below. Check them out.

It's obvious you're WAY younger than me since you remember all these details like it was yesterday. *sigh*

Interesting information. This trip really does sound like fun and I agree with Janie, you have a good memory!

How fun that they have that shoot out every day. And I love the houses stacked on the hills.

So cool! Love the pics of the town! I can't wait til you come to visit ME!

We went there last summer. I loved it and wish we could have stayed and explored longer. WE met a biker couple headed there.. in the rainstorm...They were the nicest people EVAH..

We hung around the 1890's town longer than they did.. many miles down the road.. we found them taking shelter under an overpass, from the driving rain...

What a wonderful trip! Your photos are great, too. Thanks for sharing!

Oooooh, Devil's Tower. Is that the one in Close Encounters? Cool.
This trip is so interesting, SMB. :-)

I've always wanted to do a cross-country trip... your tales of adventure are making me want to do it sooner rather than later!

MLS-If I hadn't taken thousands of pictures, I probably wouldn't remember a thing. But it was a pretty memorable trip.

Debbie-I wish I had taken better pictures of the houses.

Fancy-Is that an invitation? Careful, we're known as the guests that won't go home. *wink*

Queen-Bikers get a bad rap a lot of times but the truth is I've never met one that wasn't very nice. Thanks for stopping by and I hope you'll visit again.

Beth-I'm glad you enjoyed them.

Movie-Yes it is the location for Close Encounters.

Lilu-Just do it, girl. You and B would have a great time.

I want you to plan my next road trip. I like everywhere you went.

Martyn-I did really enjoy it and wish we could have spent more time there. I love American History of all kinds and will have to take a look at the book you recommended. Thanks for stopping by and I hope you'll visit again.

Pseudo-I don't think there will be any trips for me in the near future so planning one for you would be almost like going. It's a deal!

When you mentioned that shootout, I remembered being there on a vacation! A lot of my trips I've forgotten but I remember that part.

I know I told you before but I love this little journey you're taking us on!

How fun! I love checking out all those cute little towns around the good ole USA. I love history, now that I've lived a little of my own.