THE MAKING OF A BIKER CHICK - Needles Scenic Byway 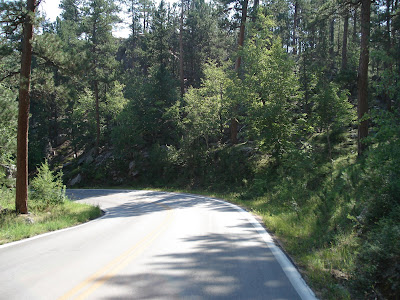 We left Custer after breakfast and headed for Deadwood and Lead, SD. The Needles Scenic Byway was recommended to us by the owner of the Valley Motel. I could just kiss her for that. This was one of the most beautiful stretches of pavement I've ever seen. As the crow flies, I'm sure it's not nearly as far from Custer to Deadwood as it seemed but no one cared because this was a great place to be. I was even able to forget about the brick masquerading as a motorcycle seat and enjoy the ride. The road was one hair-pin turn after another with all these tall needle like rock formations in the mountains. I'm not sure if the highway is named for the turns or the rocks but either way it is just a little slice of Heaven on Earth. There's not a lot more I can say about these pictures. They pretty much speak for themselves. 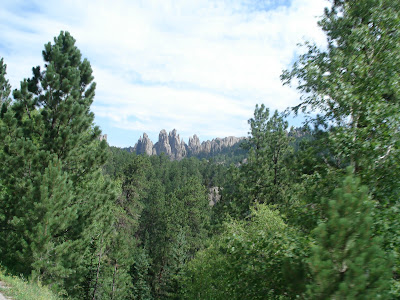 These photographs were all taken from the back of a moving bike. 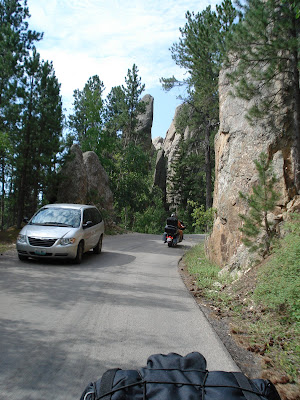 You can see here how narrow the road was with the mountain rock on one side and an opportunity to plunge to your death on the other. 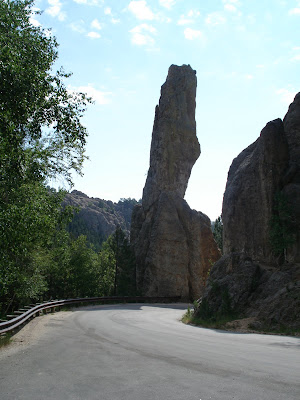 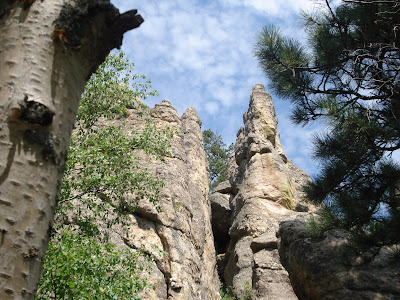 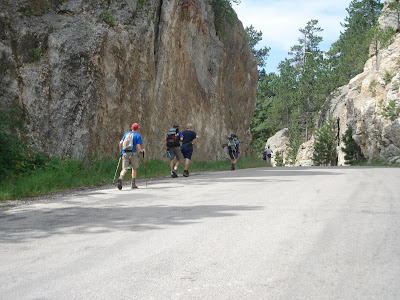 At least we weren't on foot. Look at these brave souls. 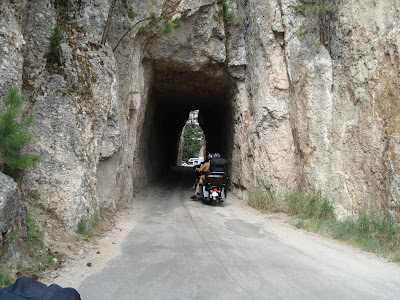 There were a lot of tunnels like this. They were one way (at a time) only. You sit on one side and honk your horn to let the other side know you are coming thru and to wait until you come out before proceeding. It's a very hi-tech system. 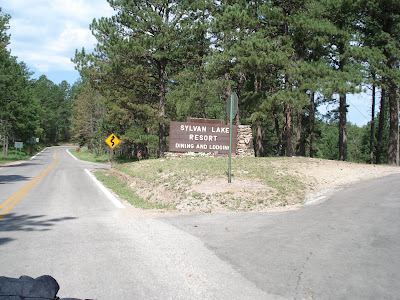 I took this picture so I would know where to return. Like Hanzel and Gretel. This is my bread crumb. 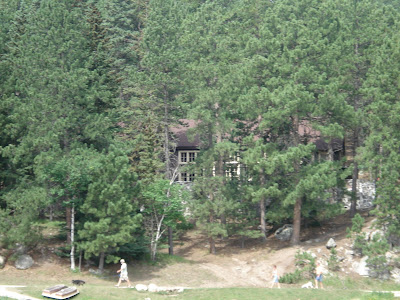 When we arrived at this spot and I saw this inn and the view that it had to offer, my first thought was that I wanted to stay here for the week and write. I didn't even blog back then. Still, that was my thought. I would stay there and write and MHS, Biker Nazi and The Saint could just come back in a week and retrieve me. Look closely at the little patch of grass there and you can imagine me with my laptop. 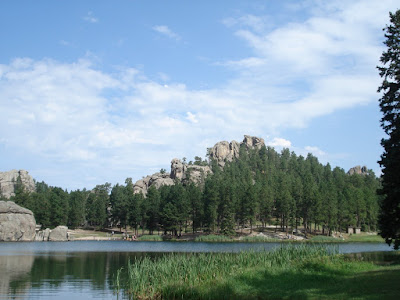 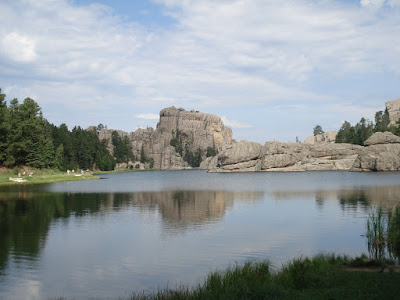 This particular shot may look familiar to you even if you haven't been there. Have you seen the movie, National Treasure 2 - Book of Secrets.

This is the film location for the scene at the end of the treasure hunt. Imagine our surprise later that year in the movie theatre when that scene appeared on the screen. MHS and I looked at each other and said in unison, "We were there!" 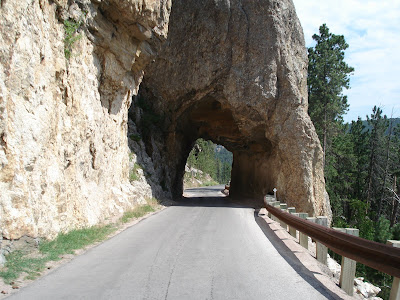 Another possible death plunge on the right. 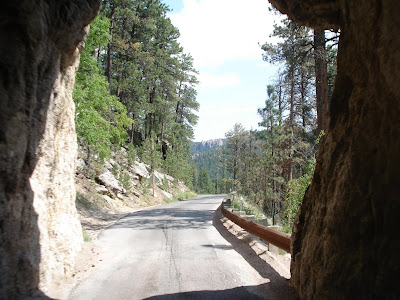 Yes, there is light at the end of the tunnel. 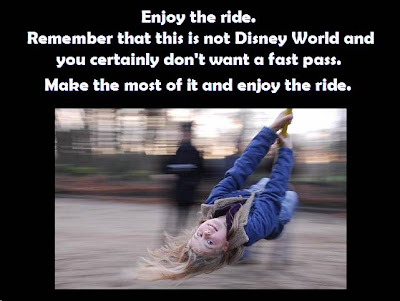 I had a lot of anxiety about going on this trip. I'm so glad that I didn't chicken out. It was one of the most amazing experiences of my life. I don't regret a single second of it. OK, that's a lie but for the most part, it was pure pleasure and fun, fun, fun!

Wow - that is BEAUTIFUL!!! Great pictures. You've given me wanderlust!

How beautiful! What an experience to remember back on and to think that you might have missed this had you not gone. So glad you did! I'm sure glad that you still have your love for writing!

I love your biker road trips. Beautiful pictures, hard to imagine they were taken while the bike was moving.

That little writing place you pointed out does look wonderful

Thank you so much for the wonderful trip! The photos are stunning, especially when enlarged which I always do. Mountains and rocks that's what we miss in my flat, wet country.(sigh).I grew up in a country with mountains and I loved them, if only for the cooler temperature for Indonesia was always too warm for me.

Wow. Your photos are absolutely amazing. I was there as a child but I had forgotten all about it until I saw your pictures and it came rushing back. This country has some of the most beautiful places in the world in it.

Whoa - roads like the make me nervous in a car - kudos to you for doing it on a bike!

The photos are simply gorgeous. Thank you so much for sharing yoru ride with us!

thank you for sharing!!!! i am petrified of motor cycles but this totally made me want to jump up, and go on a road trip on a bike. and i don't like wind in my hair. so this is sayin' A LOT. :) we are very alike!!! sigh. i have actually been to a similar place- the whole 'mountains with tiny tunnels chiseled out of them' theme. my mom and i were driving cross- country from california to illinois and we decided to do the northern route instead of southern that we'd done before. i am so glad we did. AMAZING. nature is BREATH-TAKING. and thanks for the bread crumb. i'm totally on a google mission now :)

Those pictures are just amazing. That's a place I have never been.. I always seem to take route 70 across country for reasons I don't quite understand. I want to go to THERE _ Up THERE!

Beautiful photo's, I am jealous. It doesn't look cold there at all!

I'm getting motion sick just from looking at your pictures. LOL It's beautiful.

I'm afraid I'd be the one with the radio blaring and not hear anyone honking as they were coming through the tunnel. That would not be good.

Do you think MHS would consider a three seat bike? I don't want one of those side cars either. He'd probably go through that tunnel and knock me off the side down the mountain.....just so I'd stop texting you at 1 a.m. your time. ;)

I could stay in that inn a LONG time:)

*sigh* Ohhhh I so miss motorcycle trips. I loved hearing about this and I can only imagine the hairpin turns on a bike. Wow. :) Great fun.

I've never been to the northern Midwest... it might be time!

Have never done a motorcycle trip..... Never owned a motorcycle so that's probably why, but it looks to have been a wonderful and I'm so glad you went too.

Those are absolutely incredible!!! I just LOVED the shots!!

Hate to call you out here... but the loving "every second of it" is quite a fabrication. I believe there was some crying in the shower and refusing to go out... but the pictures are just so pretty you forget all that, huh? amazing what a time does for the memory

24-I highly recommend this trip.

Smiles-I'm so glad I went too. And what a nice thing to say about my writing. **muaahh**

Pseudo-I tool well over 1000 pictures on this trip. I think taking them from the moving bike helped to assuage my fears. That and my ipod.

RW-Thanks. This trip was during the summer and it was hot most places but you could stay cool as long as you stayed in the higher elevations.

Movie-You should. Just do it.

BV-I've never been out of the US but someday I would like to see Europe. But I'm totally content to continue exploring these good ole United States of America.

Jan-I won't lie, there were some nerve-wracking moments but for the most part, I was very relaxed. MHS is a very careful driver.

Fancy-There's a lot more to come. I just hope everyone doesn't get bored with the whole thing.

Lo-If you go to the Sylvan Lake Resort, please take more pictures and blog all about it. BTW, I always wear a helmet so there is no wind in my hair. That's why all my pictures have "helmet hair."

Crone-We stayed off the interstates for almost all of the trip. That's the only way to tour.

Thyme-Those pictures were taken in summer. I'm sure there is snow there now.

MLS-I'm going to get right on MHS to rig a seat for three. LOL There were times when I thought a sidecar wouldn't have been such a bad idea.

Debbie-You and me both! One day, I'm going back.

Mama-I'm thinking you should be a biker chick in SL. Do they have those?

Lilu-You and B! Make plans now. You'll love it.

BRG-My moving photos don't compare with yours but I sure do have lots of them. Thank goodness for point and shoot cameras.

Snow-I clarified that point. And BTW, didn't your mama teach you any better manners than to be such a blabber mouth!

Mona-Oh.yes.I.did! ROFL @ your deletes. You are the Queen of deletes.

beautiful area...i really do need to go to South Dakota...it reminds me a bit of the Banff area here in Canada...

What wonderful pictures! I see faces in the rocks, and am suddenly consumed with the idea of traveling that road. You take beautiful photos, and your descriptions are wonderful.

Thistle-You would LOVE it. I hope to go back again some day. So much to explore and so little time....

Beth-Thank you so much for your kind words and for stoping by my site. Please stop by again sometime.

WOW, awesome awesome photo's!!
I love SD when I took Grandma last May
Thanks for all the nice comments you are leaving on my blog. I really enjoy hearing from you.

Sara-SD was a pleasant surprise. I had no idea how beautiful it was until we went there.

To quote the Eagles, your pictures give me "A Peaceful, Easy Feeling". That's some zen inducing scenery! :)

Coach and I took that route a few years ago. We took a road trip from Oklahoma to Spokane, WA. We made a circle and came back a different route. It was probably the best trip we have ever taken. Beautiful shots.

I'm loving this journey! Thank you for sharing it. :) The pictures are gorgeous - and I'm sure that being there was even that much better.

What great pix. I'm a big chicken when it comes to mountains and driving. I would be scared to death on the back of a cycle.
However, the scenery is breathtaking!