THE MAKING OF A BIKER CHICK - Devil's Tower 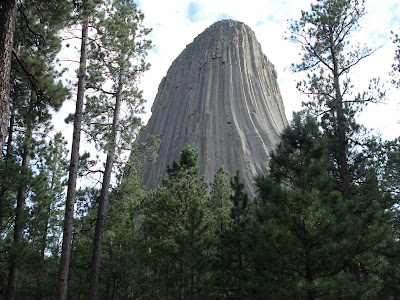 I know that I keep saying this about every stop along our bike trip out west but Devil's Tower was truly at the top of my list of favorites.
If you're wondering, yes, this is the location from the movie, Close Encounters of the Third Kind. Mashed potatoes, anyone? 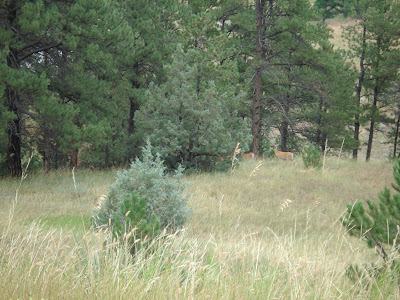 Looky what we saw along the way to the tower. You might want to click on the photographs to enlarge them and see the aminals. *wink* 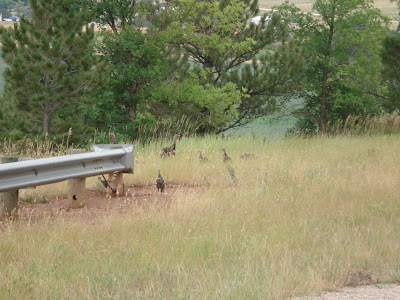 We came upon these wild turkeys and couldn't resist stopping to take a closer look. 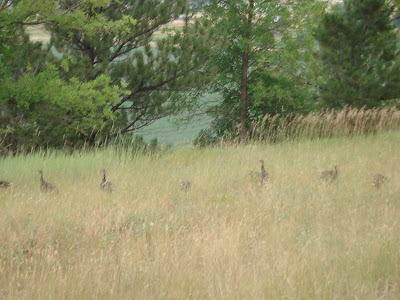 The Saint and I chased them until they lined up in a chorus line and did a little dance for us. 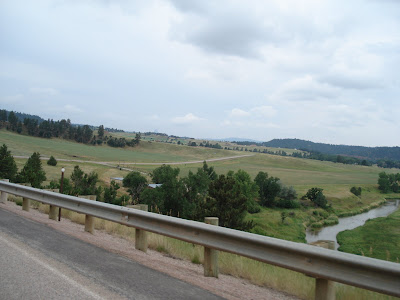 Just as we were leaving the turkeys behind, I looked up and caught my first glimpse of our destination. 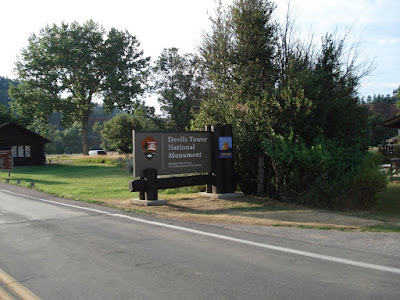 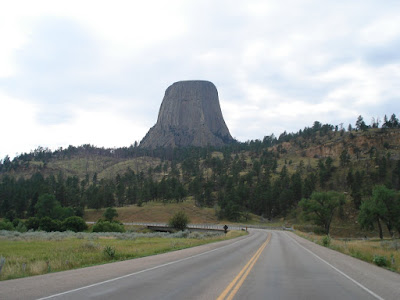 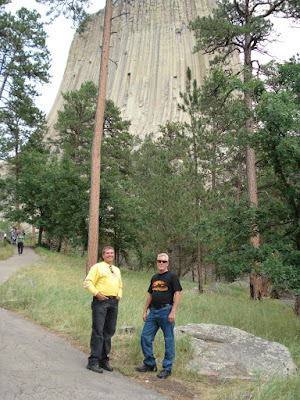 The Biker Nazi and My Harley Stud (wearing long-sleeved pants!) 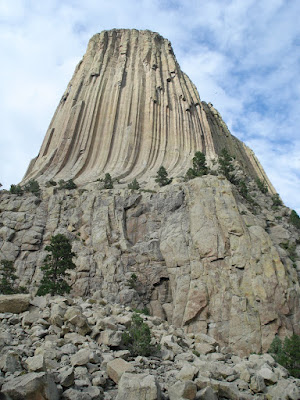 There are a lot of stories about how Devil's Tower came to be but my favorite is a Native-American tale about six Sioux girls who were picking flowers. A bear appeared and chased them. The Great Spirit saved the girls by raising the ground beneath them. The bear tried to reach them by clawing his way up explaining the "scratch marks" in the rock. 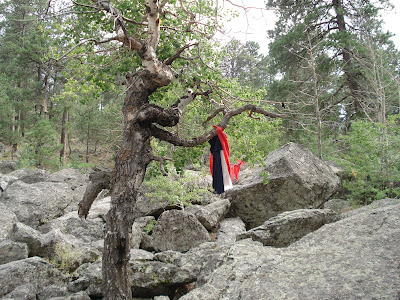 Devil's Tower is considered sacred ground to many Native American plains tribes. This is a photo of a prayer cloth tied to the tree. We were told that they will also leave prayer baskets although we didn't see any on our visit there. 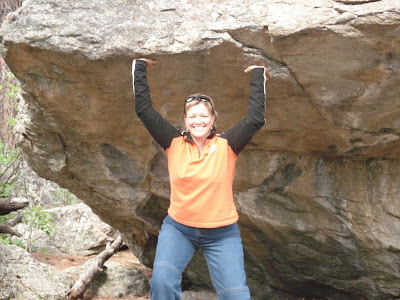 The Saint held up this boulder so we could pass underneath. Sure glad she ate her Wheaties that day! 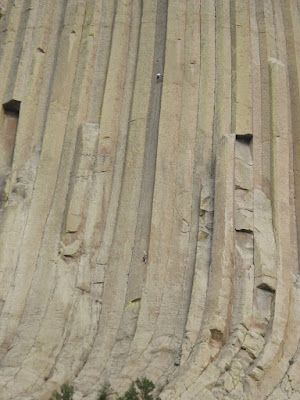 Click to enlarge this photograph and you will see two climbers. Yikes! 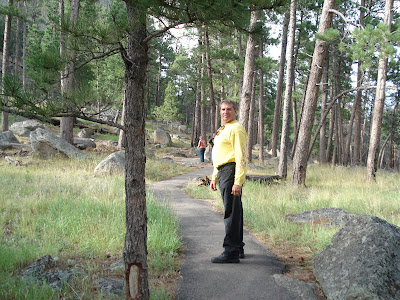 We walked all the way around the tower. All these rocks that are on the ground have fallen from........up there. Keeps ya on your toes.
See how MHS checks to make sure that I didn't get eaten by a bear or hit by a falling rock.
He's my hero! 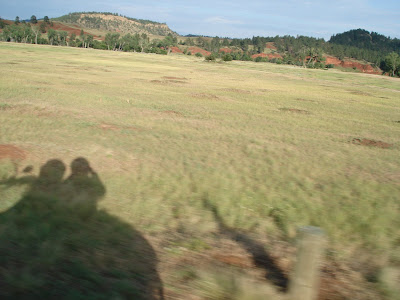 On the road again, the Devil's Tower is behind us.
You have to look closely and even then, you can only see two but this whole field is filled with prairie dogs. They were so cute. I swear that a few of them raised up on their hind legs and jumped up and down and said, "Pick me, pick me! Take my picture, Smart Mouth!"
And so I did. 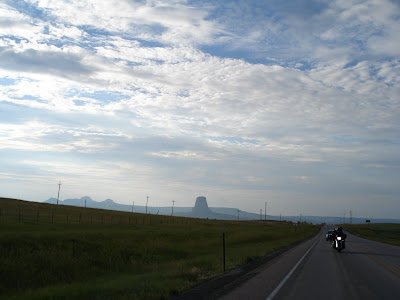 This photograph is my pride and joy. MHS noticed the view in his rear view mirror. He told me to take a picture. But he didn't stop and I couldn't get turned around to get the shot. I just turned the camera around and took it without looking. I think it turned out really well if I say so myself.
And I do say so myself.

It was bound to happen. Even though this was a great day. Something happened to my psyche on the long ride back to Deadwood that night. I had what you might call a little melt-down. I was cold, my butt hurt, the trip was starting to wear on me and I was seriously doubting that I would be able to go many more miles. And there were so many more miles to go. You know how when you're in the middle of "it", things just seem so big, overwhelming and tragic! No? Well, that's where I was. It didn't help that we were returning to my least favorite lodging of the entire trip. It was no place to look forward to, believe me. I don't want to mention any names here but the motel's initials were "Golden Nugget", I think. It's been awhile and I could be mistaken. It's definitely something I try to forget.

By the time we made it back, I went straight to the shower and cried for an hour while the hot water thawed my bones.

The Biker Nazi and The Saint stopped by to get us for dinner. MHS told them I wasn't feeling well and to go on without us. We ate a bag of sour cherry balls for dinner while lying in bed and watching tv.

Morning's light brought me a new attitude and I was ready to once again face the world......and the bike.

Ohh...that's a little bit sad, that ending. I had a trip like that Los Angeles. Different reasons, same effect...melted down and messy.

But i will say you took some great shots and now i really want to go see these places now. Great travelogue. So happy you discovered blogging so you could share with us.

I still think your a pretty cool biker chic, melt down and all. Hell, we all have melt downs now and then...we are human and sometimes under certain conditions, certain hormones, certain stress over load...ect..we bust. The fact that your so honest about it makes you even cooler.

I still think your trip was way cool and love the pictures...how cool it is that we could enlarge the pictures and see such details as people climbing like that(something my daughter does and scares the crap out of me)! Very amazing.

I didn't recognize MHS in his long sleeved pants. :) Sorry about your melt down but at least now I know you're human. You did way better than I would have, which is the main reason HBL doesn't have a Harley. He'd be really lonely going on all those cool trips along. *wink*

Did I miss something?

Spectacular photos.
Everyone has meltdowns. Even on once in a lifetime trips. :-)

I think the meltdown makes you a very cool biker chick, and the photos are great!

I think someone should pay you to travel around the country and take pictures and write about it. Like a travel reality show! Honestly, I feel like I was there. Great story.

What - no Mother Ship?

The pictures are simply incredible!!!

that pic shows some mad skills, girl. also? what the HELL are those two crazies doing climbing???? oh HELLS NAH. i would've been like YO! lunatics! get the eff down! motorcycles are enough 'thrill' for me thank you. also? i would've cried too. i SO don't do nature. i like to look at it. from a nice cozy zen room with 1,000 thread count sheets thank you.

I still think you're a really cool biker chick - the humaness and honesty makes you even more so. MHS hanging with you for the evening and eating sour balls endears me to him.

And I'm still jealous of th trip (even with the meltdown); these photos are amazing. those crazy hikers really demonstrate how big that tower is.

Thistle-I think a good melt-down is good for the soul sometimes. I would like to hear more about your LA trip.

Smiles-Yes, I think the climbers are a bit crazy but that's just because I have no idea about anything like that. I guess it would be a thrill.

Movie-I think for me is was "especially" on once in a lifetime "bike" trips.

Ginger-OOOOOOOOOOOO, I do too. Do you know someone who will? *wink*

Braja-I don't know. Did you? Now I feel like I did. I can be pretty dense sometimes.

MLS-Yeah, he does look different, huh? Are you sure we can't talk you into a Harley. We could have so much fun. We could meet in the middle.

Jan-I couldn't figure out how to make the musical noises but I really wanted to.

Fancy-"Ship" definitely happened to me that day and it was odd because it was such a great day. I think I just got cold and miserable fast. It was the only time we rode at night.

Lo-I really enjoyed it for the most part but that's because we didn't rough it too much. I hear ya on the sheets. I love me some quality bedding.

Pseudo-Thank you and yes, MHS is a good guy.
I think you should contact the Biker Nazi though for your trip planning because he was the man with the plan. However we had no reservations and no timeline. Just an idea of where we wanted to go.

This is so cool! I've never seen anything like that.

And I hope you showered for at least an hour- nothing like a hot shower in your own home after a long trip!

My meltdown came when we were going from Red River ,N.M. to Taos, N.M. We ran into some rain and it felt like ice bullets. We were thoroughly soaked and freezing by the time we got there and I was in tears. Even the hot tub couldn't get me warm that night. Happened again between Springfield, Missouri and Eureka Springs, Arkansas. Not my favorite biking memories. Love your pictures though.

Thanks for the amazing pictures, and being an honest biker chick. Sometimes we all have sour cherry balls for dinner, and there is nothing wrong with it so long as you can start over in the morning.

Sometimes a meltdown helps see everything in perspective. I was ready for a meltdown today - but I got sidetracked by something else. I'm envious of the trip and the photos are amazing! Good work!

Lilu-Well the hour long crying session in the shower was not in my own home but it felt damn good anyway.

SteppingThru-OOOO, I want to hear more about your biker days.

Rachel-Thanks for your kind words and for stopping by. I hope you'll visit again soon.

Beth-Life is like that sometimes. I'm famous for saying I don't have time to have the nervous breakdown I so deserve. LOL

I had forgotten the connection to the movie but that sight is so completely fantastic. You are so lucky to have been able to make that trip, even though you had a few challening moments.

What I really think is that I loved the trip because I'm was not cold, my butt didn't hurt, and I have my own king sized soft bed to sleep in and not a miserable Motel that I don't like to look forward to. So..You had a right to feel like you felt..but being you, you woke up ready to face the rest of the trip and adjusted your attitude. That's my girl and I admire you as much as my daughters. You remind me of them..
:)
Mona

BV-I'm thinking I need to re-watch the movie too.

Mona-I'm honored that you feel that way.

That tower is just AWESOME! I have to go visit, if only for a close encounter rush.

Even cool biker chicks have the right to a mini meltdown while travelling 20 gazillion miles, through dangerous terrain on the tail end of a bike.