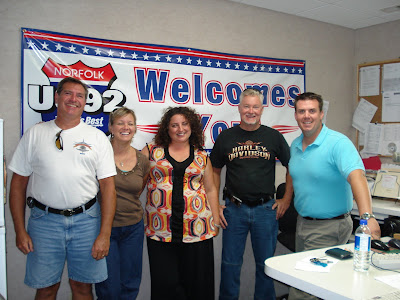 When My Harley Stud told me in February 2007 that he and the Biker Nazi wanted to take The Saint and me on a bike trip out west that summer I laughed. Until that time I had not been further than an hour's ride in any direction away from our home. These men are no dummies and they started working on me months in advance. The Biker Nazi and The Saint had owned their bike for much longer than we had ours and The Saint, while never going on a ride of this duration, had been on many shorter trips with the Biker Nazi and their friends including the Great Hunter and the Texan. I was scared that I wouldn't be able to take it and would ruin the trip for everyone else. I was nervous because I wasn't all that comfortable with the idea of riding a motorcycle everywhere I went for two weeks. I was terrified that I wouldn't be able to pack all the necessities that I require on any trip long or short. I wondered if there was an exercise you can do to prepare your butt for such punishment? MHS assured me that we would take the GPS with us, I would be able to locate the nearest airport and he would take me there no questions asked any time I decided to bail.

So with the promise of a GPS and a ride to the airport of my choice as my insurance policy we began to plan for our trip out west. Now I may be dumb but I'm not stupid and there was no way I was riding a motorcycle from Florida to Indiana just to leave again on said motorcycle for an even longer trip westward bound. MHS loaded the bike into the truck and we drove to Indiana. Once there both MHS's bike and the Biker Nazi's bike were loaded onto a trailer because, let me repeat myself, these guys are pretty smart and they knew the shorter the actual ride, the better chance of success and peace in their homes. Because everybody knows that IF MAMA AINT HAPPY, AINT NOBODY HAPPY!


The morning after we arrived in Indiana, we set off early in the Biker Nazi's truck with the bikes in tow for Norfolk, Nebraska. We arrived in Norfolk by early evening where we were graciously hosted by friends of BN and TS, a family from our home town, the stunt man and his lovely wife and children. They have a beautiful home just outside of Norfolk. The guys got busy right away unloading the bikes from the trailer and getting everything ready for us to leave in the morning. The Saint and I had the pleasure of catching up with Mrs. Stuntman while being serenaded by the musical stylings of their 4 year old son on his toy guitar. Life is a Highway was the song of the day and quite appropriate if you ask me. The man knows his audience.

The next morning we set off with our bikes loaded up with supplies like two pack mules. Goodbyes and thank yous were given quickly to Mrs. Stuntman and the boys. The Stuntman had left early for work.

Our first stop after breakfast in town was to stop at the local country radio station where the Stuntman is the Operations Manager and morning DJ. We received a quick tour of the station. Then the Biker Nazi and MHS were interviewed on the air about our trip. 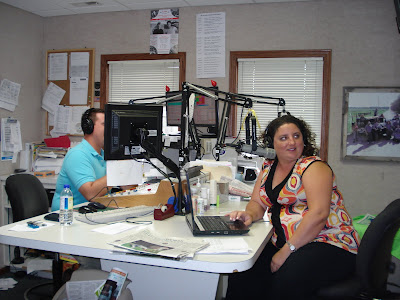 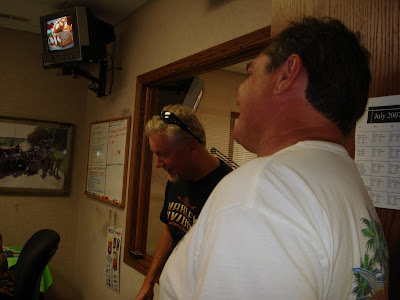 With no more excuses to put it off any longer great excitement, we set off on our journey. It was cool that morning and the ride was pleasant. BN had done this trip before and warned us that we should fill up with gas at every opportunity because we would be taking the back roads and there was no telling where the next filling station would be. I liked this idea initially because it meant more stops until I realized that it also meant the possibility of being stranded in the middle of nowhere. Fortunately that didn't happen.

It wasn't long before we made it out of Nebraska and into South Dakota. The morning coolness had disappeared. It was hot. I mean really hot. If you've never been on a bike before, usually the air moving past you will cool you regardless of the temperature. That rule doesn't apply when it's 114 degrees. Yes, that is what I said; one.hundred.and fourteen.degrees! It was like driving through a furnace. We would buy bottles of water at each stop. If we didn't drink the entire bottle before we left, they would be HOT by the next stop.

At one point when we hadn't stopped for awhile, I started having my own little mini-nervous breakdown. I was hot. I was tired of being on the bike. My butt hurt. I was thirsty. And with each turn that didn't find a gas station where I could get off the damn thing and rest, my mood worsened. MHS was leading and we finally came upon a gas station on the outskirts of a small town. It was really more of a pole barn with pumps in front. It didn't look very inviting. MHS continued on driving toward the town. I am telling you right now that if I had a gun at the time, I would have shot him, pushed him off and done a u-turn back to the station! He did eventually go back once he found that it was the only station in town. By that time, I was really mad at him. I may have been a bit irrational in my anger. I was finding it hard to concentrate and hard to breathe. I had a headache and may have been suffering from heat exhaustion although I've never checked the symptoms. All I knew was if that was an example of what I could expect on the trip, I would be exercising my right to find the nearest airport soon.

***Stay tuned for coming attactions: "THE MAKING OF A BIKER CHICK - The Badlands" coming soon to a blog near you.***

Posted by Smart Mouth Broad at 6:00 AM

Sounds like such a great time! I'll be honest and say I am quite jealous as it's been a dream of mine to take road trip like that on a bike. I highly doubt it will ever happen since my husband doesn't own a bike. So I'll just have to live my dream through you and your travels with your Harley Stud. Great post! Happy Monday to you too!

More power to you girl. This world will never see my butt on a bike either cross country or in my own driveway, but I'm enjoying your experience vicariously.

This is so cool, I can't wait until the next segment. I mean, sorry about the 114 degrees, but otherwise, back country roads, small towns, ridding a motrocycle the whole way?? What's not to like? One of my dreams there.

Can I just say Easy Rider...

Yes! This used to be my mantra! Well, I used 'Daddy' instead of Mama, but still.

I love 'Life is a Highway!' Even when it's 114 degrees, which sounds pretty dang hot. :D

But I must say you made one fine Biker Chick, no matter how you got there. LOL My son and his group do those long trips and he says it's a darn good thing bikes only hold enough gas to go about 150 miles because he's only got a 150 mile butt.

When he made one way of his first trip, he went in search of a gel seat for the trip back home. LOL

Smiles-If you liked that part of the trip, stay tuned because it got much better. Happy Monday to you too!

BRG-That's great because I am living vicariously through you and your Blue Ridge life. I love that area!

Psuedo-That was definitely the worst part and it gets much better. I think we were more Wild Hogs than Easy Rider though! LOL

MLS-I have more of a 100 mile butt and I got a different seat and foot boards as soon as we got back.

*sigh* I am so envious. I really miss riding. I had a b/f for 3 years before I met and married Dr. Jekyll. He had a Harley and we used to take road trips all the time (day trips, anyway). I LOVED it. You are so lucky. :)

i absolutely have 'Born To be Wild' playing in my head right now...

and what smart men your husbands are, i am amazed just cos i'm so used to watching my parents fight over stuff like this and there never seemed to be that much compromise and sensitivity to the planning, from either of them...probably one of the reasons i'm commit-phobic :)

Mama-I'm finding it really funny that I thought this was such an awful day and everyone thinks it sounded like a great time. LOL You should write about your trips. I would love to hear about them.

Thistle-LOL! I was really worried but the guys were true to their word. If I was unhappy, it was my own fault because as you will learn in future episodes, I didn't always speak up.

My butt is hurting from just reading this post. Ouch. But I am a girly candy@ss.

Fancy-Believe me, my butt was hurting!